Kenyatta and Odinga met for the first time since last summer’s contentious presidential elections to start what they called a joint push for national unity.

“Both of these men show great leadership, in coming together in the agreement they signed today,” the secretary said Friday. “The United States looks forward to supporting the process that was announced this morning to bring the country together, and to address the various national divisions.”

The top U.S. diplomat went on to stress the importance of an independent media to democracy and said the government should not stifle the media.

“We believe that there are actions that need to be taken in Kenya and that they need to correct certain actions, like shutting down TV stations and threatening the independence of the courts,” Tillerson said. “I know Kenya takes these matters seriously. A free and independent media is essential to safeguarding democracy and giving all Kenyans confidence in their government.”

The Kenyan government shut down three television channels in January on the day that Odinga took a symbolic presidential oath in a mock inauguration. The government defied a court order to allow the stations, which had planned to live-stream the oath, to resume broadcasts.

Foreign Minister Juma said moving forward, the government of Kenya is committed to a genuine political process based on fundamental values.

“I have reaffirmed and the president as well has reaffirmed Kenya’s commitment to the values of democratic governance, constitutionalism, the rule of law, and human rights,” Juma said Friday.

Secretary Tillerson says the U.S. will seek to work with African nations, providing them with incentives to improve governance and meet their long-term security and development goals. He is on a five-nation trip to Africa that began earlier this week.

He arrived in Nairobi Friday from Djibouti. Tillerson kicked off his trip with a visit to Ethiopia on Wednesday, where he met with the country’s prime minister and the African Union Commission chief. 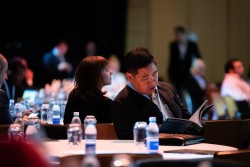