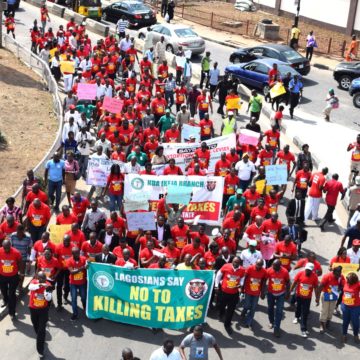 The Nigerian Bar Association (NBA) and human rights groups on Tuesday took to the streets of Lagos to protest over 400 per cent hike in land use charge and other taxes by the Lagos State Government.

The walk, which started from the NBA secretariat, Ikeja, took the protesters to the Lagos State Governor’s Office and House of Assembly, Alausa. Newsmenreport that the NBA, Ikeja branch, had on March 7 issued a seven- day ultimatum to Gov. Akinwunmi Ambode led-administration to reverse the increment.

The state government had increased the Land Use Charge by 400 per cent, Motor Licensing fees by 1,600 per cent, Court Fees by 2000 per cent and Bore Hole Taxes by 68,000 per cent. Lagos State Governor Akinwunmi Ambode Addressing protesters at the take off of the protest, Mr Adeshina Ogunlana, NBA Ikeja Branch Chairman, said the protest was a clear no to oppressive tax regime in Lagos State.

Newsmen report that Committee for Defence of Human Rights (CDHR), Joint Action Front (JAF) and the Human and Environmental Agenda (HEDA) joined the protest in solidarity with the lawyers. The protesters came with red T-shirts, banners, placards and handbills with inscriptionsinscriptions such as “NBA rejects opressive taxes in Lagos State”: “No to Killing Taxes”. Others are “Ambode Stop This Oppressive Land Use Charge,” “We Say No to Double Taxation,” “We Say No to Insensitive Government Policies,” and “Don’t Kill Lagosians With Tax”.

Some of the protesters told newsmen that the hike in taxes would cause hyper inflation. ” The increment in taxes will lead to job loses and increase in unemployment. This will increase crime rate and insecurity in the state,” said Ayo Lamuye, a human rights lawyer. At the Lagos State House Secretariat, Alausa, Mr Kehinde Bamigbetan, Commissioner for Information and Strategy, received the protesters’ petition on behalf of Gov. Ambode while the Majority Leader, Sanai Agubiade,received on behalf of the Assembly. Newsmen report that NBA’s letter to Ambode was dated March 12 and titled “Call For A Re-think and Review of The Land Use Charge Tax, All Other 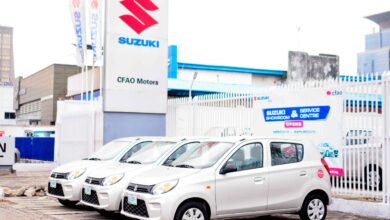 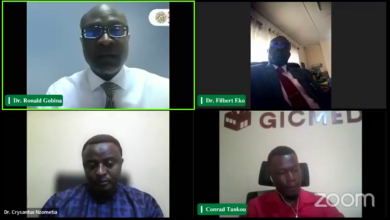