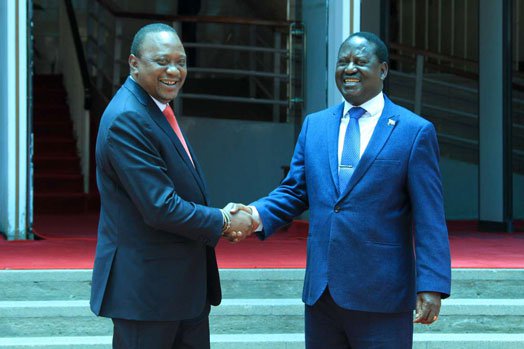 On August 8, 2017, Kenya held its presidential election. The election was conducted in a tense environment and since then, the two main candidates going into the elction (Raila Odinga and Uhuru Kenyatta) had been at loggerheads. However, Kenyans woke up to a surprise on 16 March, 2018 as the two held a press release where they stated their new found desire to move on a reconciliation path as ‘brothers’.

The news came as a surprise to virtually everyone especially considering that it had barely been a month since Odinga had inaugurated himself as the ‘People’s President’ in a move which prompted Kenyatta to retaliate by charging some of Uhuru Kenyatta’s supporters with criminal nuisance and even issued arrests for some including the lawyer who inaugurated Odinga.

While the path of reconciliation taken by Odinga and Kenyatta is commendable, it is a bitter taste for those that were involved in the political violence and disturbances that saw over a 100 people dead and hundreds of others injured and displaced in the aftermath of the August 8, election. It is against this background that this article calls for Africa to reinvent itself.

Shifting from the culture of violence

From Cape to Cairo, African politics suffer from the culture of violence. Be it, sponsored violence induced by politicians or the random desire by one group (ethnic/tribal/race/social class etc.) to dominate another, African countries at one point or the other experience disturbing acts of violence that are politically motivated.

While the top hierarchy rarely suffers from this violence, it’s the total opposite when it comes to those at the bottom. True to the proverb, “when two elephants fight, it’s the grass that suffers” the general African populace has been affected and suffered the most from political disturbances. This, therefore, means that if any reinvention is to come, it is imperative that it starts from the bottom up for it to be effective.

One of the many memories that the legend Bob Marley left us is his wisdom and this wisdom is perfectly embedded in this saying, “Emancipate yourselves from mental slavery, none but our selves can free our minds.” The first and probably the only step that Africans need to take in order to overthrow the culture of political violence is for them to become aware of the political, economic and social conditions that lead them to engage in acts of violence. Such conditions which among other things include race, ethnicity, tribalism, and inferiority complex are so enmeshed in the hearts and minds of most Africans such that they subconsciously dictate how Africans think and act.

In order for Africans to emancipate themselves from these terrible conditions, it’s imperative that first, they become conscious of the conditions that exist within their minds which blindly leads them to engage and commit in terrible acts. Only when the people become conscious can there be a shift from the culture of violence to a culture of peace in African politics.

While the public possesses the power to force a shift from the culture of violence, the politicians themselves can also play a part in this shift. Often times, politicians prey on the vulnerabilities of the masses, they draw support from entrenching themselves in the politics of ethnicity, tribalism and in some cases religion and gender.

Africans need conscientization and African politicians need to desist from politics of personality to politics of substance, then and only then can Africans see each other as friends in the political arena even when disagreeing just like the newfound friendship of Kenyatta and Odinga.