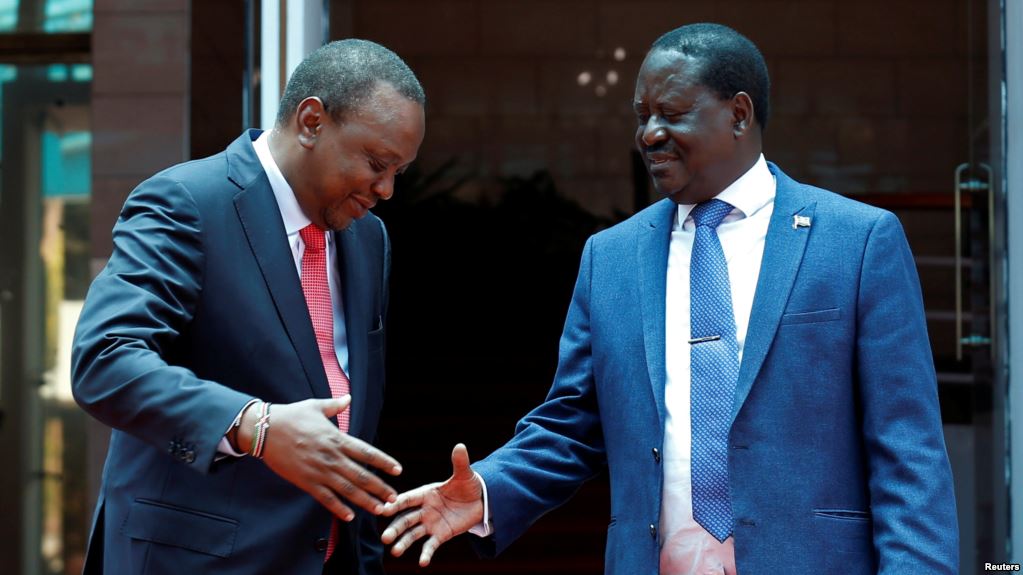 In the surprise meeting, Kenyatta and Odinga agreed to work toward unifying the country after last year’s divisive presidential election.

The two – who, after their meeting, appeared together to give separate statements to the press – acknowledged the country was heading in the wrong direction.

Odinga, who has refused to recognize Kenyatta as president, paraphrased U.S. president Abraham Lincoln. He said Kenyans needed to know where they are and where they want to go before they can better judge what to do and how to do it.

“Fifty-four years since independence, we are challenged to audit our progress toward the ideals for which our fathers fought to establish a free and independent country and for which many of our compatriots died.”

As leaders, said Odinga, they had a duty to reflect on their performance in reaching Kenya’s goals since independence: justice, unity, peace, liberty and prosperity for all.

Kenyatta said the two men came to a common understanding that for Kenya to come together, its leaders must come together.

Miguna Miguna, a prominent Kenyan opposition lawyer and politician who was deported to Canada in February, denounced the Kenyatta-Odinga reconciliation.

In a statement posted to Facebook on Friday, he called the rapprochement “a fundamental betrayal of the innocent Kenyans who have lost their lives” supporting Odinga in several elections over the last decade.

Miguna, whose deportation was ruled illegal by Kenya’s High Court, said in his statement that he would return to Kenya on March 26 “to continue the struggle for electoral justice….”

On the streets of Nairobi, Kenyans also welcomed the leaders’ agreeing to work together.

“It’s a really good step towards harmonizing the country,” said Brian Wanjoki, a pedestrian. “Because the electioneering period has left us divided … supporters of both sides. So, I think it’s a really good idea that they’ve met. And, hopefully we can progress from this.”

Noting “the economy has been down,” Ndung’u said if the two “resolve their issues, well, at least it will show that we are moving forward and the issue to do with the election is it behind us.”

Devil in the details

Kenya was plunged into political crisis after the Supreme Court annulled the August presidential election, due to irregularities, and Odinga and his supporters boycotted a second round in October.

Odinga refused to recognize Kenyatta’s win; in January, he held a rally where his supporters symbolically inaugurated the opposition leader as president. Observers feared further division would follow the provocative action and the government’s crackdown on independent television and the opposition.

“The meeting must have been come out of pressure from the U.S. secretary of state,” Andati said. “… You know the West has been very keen on trying to get Uhuru and Raila to meet. So, it helps ease the political tensions….”

While Andati called the agreement on unification significant for healing Kenyan politics, the devil will be in the details. We need to understand what exactly has been agreed upon, he said, noting the Kenyan leaders’ statements contained only generalities.