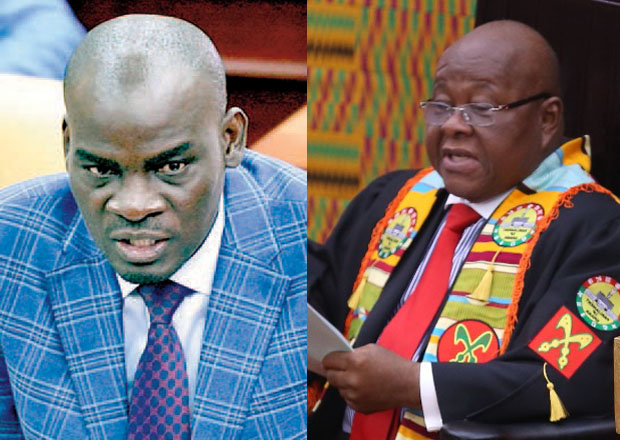 The Minority in Ghana’s Parliament is accusing speaker of the House, Professor Aron Mike Oquaye of killing the country’s democracy. The never ending acrimony between the Minority in Parliament and the Speaker Mike Oquaye continues to exacerbate with every sitting for legislative business.

The recent fracas has led to a complete boycott of Parliamentary proceedings by the opposition National Democratic Congress (NDC) Members of Parliament through a ‘silent treatment’. It comes barely a month after a similar one where the Minority engaged the Speaker in a heated verbal exchange.

The protest was in response to the purported failure of the Speaker to recognize the leader of the NDC lawmakers Haruna Iddrisu who stood up for a while during question time when a Deputy Minister in charge of Food and Agriculture appeared before Parliament to answer a question on the completion date for an Irrigation Dam Project.

Commenting on the recent development, the Deputy Minority Leader James Klutse Avedzi called on the country’s Civil Society Organizations (CSOs) to intervene “if they want this country to progress” democratically.

“They should talk to this Speaker. This Speaker, they should talk to him. He alone cannot hold this country to ransom. No. He is an individual. Even if you are too partisan as a Speaker you should be able to cover it a bit,” he bemoaned passionately.

The Deputy Minority Leader asserts that, they have engaged the Speaker on several occasions to make known to him their concerns but it appeared that he doesn’t want to change which is clearly an indication that “our democracy is failing.”

“Custom and tradition demands that once a leader either on the Majority side or the Minority side is on his or her feet that leader should be given the right of first refusal and what that means is that the Speaker by custom and tradition is expected to recognize he or she to make whatever comment that he or she wants to make before the work of the House proceeds,” said NDC MP for Builsa South Dr. Clement Apaak.

He thus believed that the Speaker’s blatant refusal to recognize “our leader on his feet we came to the conclusion that the Speaker certainly did not want us to participate in the business of the House because not allowing our lady on his feet to contribute then it is obvious that the rest of certainly will not even measure up to the stature one would expect the Speaker to call you.”

He said their silent protest was aimed at drawing to the fact that “what is going on in the House with regards to the way the Speaker continues to belittle our leadership is certainly not going down well with us and if they cannot participate, we cannot participate.”

According to him, all is not well in as far as the Parliament of Ghana is concerned because they expect their leaders to be given the needed room to play their role.