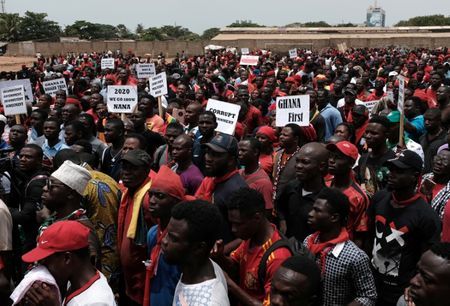 ACCRA (Reuters) – Thousands of people protested in Ghana’s capital Accra on Wednesday against the expansion of its defense cooperation with the United States, in a rare public display of opposition to the growing foreign military presence in West Africa.

“As a right-thinking citizen, I am here to fight for my country. I am against selling our peace and security for $20 million,” said Gifty Yankson, a 49-year-old trader.

“They (the American military) become a curse everywhere they are, and I am not ready to mortgage my security,” Yankson said.

Police estimated the crowd size at about 3,500 protesters. While officers in riot gear were present, no violence was reported.

International powers including the United States and France are looking to extend their presence in the remote Sahel region in particular, where al Qaeda and Islamic State militants have gained a strong foothold in recent years.

But Washington is struggling to mend its image in Africa, which was damaged by reports President Donald Trump described African nations as “shithole countries” in a discussion on immigration. The White House later denied he used that language.

Under the deal approved by Ghana’s parliament last week, the United States will invest around $20 million in training and equipment for the Ghanaian military this year. Opposition lawmakers boycotted the parliamentary vote. 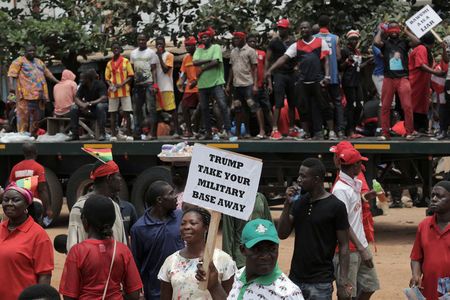 In return, the U.S. military will be allowed to deploy troops and import military equipment tax-free, use an airport runway that meets U.S. standards, and have free access to Ghana’s radio spectrum.

Ghana has had a long-standing military and trade ties with the United States, but many say the latest agreement was a step too far.

Responding to local press reports concerning the deal, the U.S. Embassy in Accra underscored in a statement last week that it had no plans to establish a military base in Ghana.

It said the existing 20-year-old cooperation agreement “does not cover the current range and volume of bilateral exercises and assistance.”

Four elite U.S. soldiers were killed in Niger alongside local troops in an Islamist ambush in October, sparking a fierce debate back home about covert U.S. actions in West Africa.

The United States has about 7,200 U.S. Defense Department personnel, including soldiers, stationed in Africa. Over half of those are stationed at Camp Lemonnier in Djibouti, with the remaining personnel scattered across 32 other smaller locations. 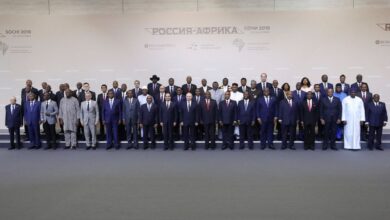