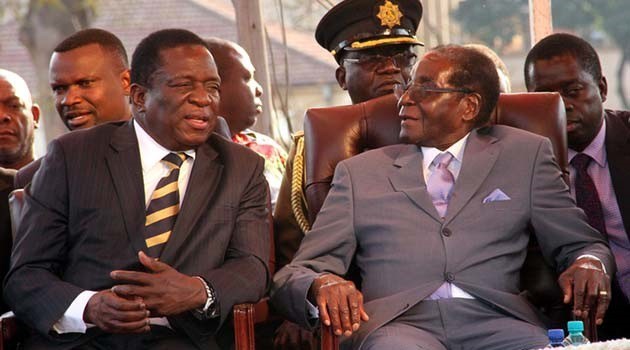 Harare (AFP) – Former Zimbabwean president Robert Mugabe described his departure from office in November as a “coup d’etat” that “we must undo” in his first TV interviews since then, aired on Thursday.

Mugabe, 94, spoke slowly but clearly to South Africa’s SABC broadcaster from an office in Harare, dressed in a grey suit, sitting in front of a portrait of himself and his wife Grace.

“I say it was a coup d’etat — some people have refused to call it a coup d’etat,” said Mugabe referring to the brief army takeover which led to Emmerson Mnangagwa assuming power after Mugabe’s resignation.

“We must undo this disgrace which we have imposed on ourselves, we don’t deserve it… Zimbabwe doesn’t deserve it.”

In another similarly vehement interview, with Britain’s ITV News, the elderly former leader said he had no desire to return to power.

Mugabe told both interviewers he did not hate his successor President Mnangagwa, 75, but alleged that he had “betrayed the whole nation”.

The ousted leader insisted he would not work with Mnangagwa and suggested that his presidency was “illegal” and “unconstitutional”.

“People must be chosen in government in a proper way. I’m willing to discuss, willing to assist in that process — but I must be invited,” he said.

Gideon Chitanga, an analyst at the Johannesburg-based Political Economy Southern Africa think-tank, said that Mugabe’s intervention was significant “coming at a time of elections”.

Presidential polls are due by the end of August in which Mnangagwa will face his first major electoral test.

“In the back of his mind (Mugabe) still sees himself as part of the problem and part of the solution,” said Chitanga.

Mugabe sent shockwaves through the ZANU-PF ruling party when he recently met with the NPF’s leader, retired general Ambrose Mutinhiri.

In response to a widely-shared image of the two, ZANU-PF Youth League supporters chanted “down with Mugabe” at a rally, a rare outburst from the normally disciplined party that Mugabe led for nearly four decades.

Mugabe was forced to quit the political scene he had dominated since independence from Britain in 1980 when the military stepped in and ZANU-PF lawmakers launched impeachment proceedings against their once beloved leader.

Since his dramatic reversal of fortune, he has largely stayed out of public life — until breaking his silence Thursday.

Despite widespread jubilation following the army’s seizure of power, many Zimbabweans are now disenchanted by what they see as a mere changing of the guard at the top of Zimbabwe’s authoritarian system.

“It was a coup with a script to turn this into a military state. The people wanted a change of the entire ZANU-PF system — not just one individual,” businessman Munyaradzi Chihota, 40, told AFP as he travelled home.

“The situation has not changed since they removed Mugabe. If anything, we are worse off. (Mugabe) is 100 percent right that this was a military coup, that this country has been turned into a military state — and that this has to be undone.”

The military moved against Mugabe after he sacked his then-deputy and heir-apparent Mnangagwa, seemingly fearing the nonagenarian was grooming Grace to succeed him as president.

The former first lady had cultivated her own factional support base within ZANU-PF known as “G-40” that was seen as hostile to the security establishment — Mnangagwa in particular.

“I never thought… he would be the man who turned against me,” said Mugabe.

“It was truly a military takeover, there was no movement visible unless that movement was checked and allowed by the army.”

Evan Mawarire, a pastor who became the face of anti-Mugabe demonstrations last year, tweeted that Mugabe “destroyed our lives”.

“Today he appears on foreign media which he banned and claims he must be invited to a transitional process for Zimbabwe #RetireInPeaceBob.”

Reflecting on his decades in power, which were marked by catastrophic economic policies, Mugabe remained adamant it had been a success story and any errors “weren’t that bad”.

“If anything, in comparison to other countries in Africa, we have had greater prosperity here and people have their land,” he told ITV News.

However, when questioned about well documented human rights abuses throughout his tenure, Mugabe appeared more acknowledging of reality.

“We have been accused of that and on that side, yes some errors were done.”