“Africa’s young people can re-invent and re-invigorate the sciences if properly equipped,” said Thierry Zomahoun, the NEF Founder and Chairman, who also heads up the African Institute of Mathematical Sciences (AIMS) at the opening ceremony of the 2018 NEF in Kigali on Monday.

“We must invest in Africa’s most important resource in the next century: young scientists who will drive research driven innovation. This is the fastest way to chart our own path to self-reliance and global competiveness,” Zomahoun said, setting the tone for the three day conference.

Zomahoun announced that, as in 2016, the Forum would run the “Challenge of Invention to Innovation” competition, where sixteen finalists will compete for $25,000 prize each in the three categories: data and deep tech innovations, climate smart innovations and personalized health innovations.

Building knowledge economies of citizens highly competent in science and mathematics is the key to African countries achieving the high income status necessary to climb out of poverty and take their place in global network of innovators, Rwandan President Paul Kagame said.

Kagame’s call for Africa to “seize the moment” through pan-African collaboration and investment in research and development was met with a swell of applause from the audience on Day 1 of the three-day gathering.

The “Women in Science” panel, hosted by Johnson &Johnson Innovation tackled the persistent gender inequality evident in the science and STEM field and discussed finding solutions against unequal pay and the unique obstacles faced by women in the field.

“We need to fix the system. We need to think about the conditions in the pipeline itself. We need to do more than just plug the holes,” said epidemiologist and NEF fellow Dr. Tolu Oni.

A 2018 United Nation’s study found that only 1 in 4 people read or heard about in news are women, and that more than half of all rural women globally lacked basic literacy, while close to 4 billion women were not connected to the internet.

“We need to focus a little less on making women more empowered and more resilient to actually fixing the system so that you don’t have to fight so hard,” said Oni, an Associate Professor at South Africa’s University of Cape Town with over 40 published articles in international journals.

The hot topic of blockchain and crypto currencies roused particular interest, especially following last week’s signing of the African Continental Free Trade Agreement by forty-four African countries, laying the ground for what could be the largest trade bloc in the world.
The consensus between the panel and the audience debating the “Opportunities for Blockchain Technologies in Addressing Africa’s Challenges” was that there were as many challenges as opportunities in the process of realising the future promised by blockchain technology.

“Before these kinds of applications can replace fiat currency they must have the full support of governments. This forum shines a light on these technologies, as so many decision makers are gathered here,” said Professor Sam Yala, Account Manager at Belgian e-payments firm Worldline and a Professor at Kinshasa University.

Kenyan born Blockchain specialist at IBM Komminist Weldermariam argued that even before blockchain could be used as a continental common currency, it could be used to simplify and speed-up cross border transactions by creating “digital ledger”.

Throughout the day, speaker after speaker stressed the importance of civil and governmental institutions in crafting the conditions necessary for scientific discovery to flourish and for young scientists to feel free to pursue their inspiration.

He added: “When Africans enter the sciences in large numbers; with their diversity, their different backgrounds; and their extreme levels of motivation, they can make massive transformative discoveries.

At one of the day’s marquee discussions, titled “Inspiring the Next Generation”, Nobel laureate Klaus von Klitzing stressed the importance of creating the conditions for researchers and experimental scientists to “develop an intuition” and be free to pursue their academic interests free of financial and administrative pressures.

“The freedom to ask questions, that is what is important for scientists. The freedom to follow a new direction” said von Klitzing, describing the 2.a.m revelation in 1985 that won him that year’s Nobel Prize for Physics.

“All scientist want to generate new knowledge and then to be able to apply it,” von Klitzing added.

The NEF Global Gathering will continue to explore the role of science, technology, engineering and mathematics (STEM) education in social and economic transformation on the continent today Tuesday March 27th and Wednesday March 28th.

Distributed by African Media Agency (AMA) on behalf of the Next Einstein Forum.
About the Next Einstein Forum
Launched in 2013, the Next Einstein Forum (NEF) is an initiative of the African Institute for Mathematical Sciences (AIMS) in partnership with the Robert Bosch Stiftung. The NEF is a platform that connects science, society and policy in Africa and the rest of the world – with the goal to leverage science for human development globally. The NEF believes that Africa’s contributions to the global scientific community are critical for global progress. At the centre of NEF efforts are Africa’s young people, the driving force for Africa’s scientific renaissance. The NEF is a unique youth-driven forum. At our headline biennial scientific events, 50% of participants are 42 or younger. Far from being an ordinary science forum, the NEF Global Gatherings position science at the centre of global development efforts. The next NEF Global Gathering will be held on 26-28 March 2018 in Kigali, Rwanda. In addition, through our Communities of Scientists, we showcase the contributions of Africa’s brilliant youth to Africa’s scientific emergence through its class of NEF Fellows, who are Africa’s top scientists and technologists under the age of 42, and NEF Ambassadors, who are the NEF’s 54 science and technology ambassadors on the ground. 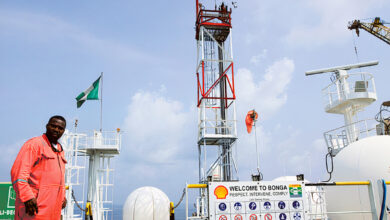 Nigerians in Diaspora Remit $21bn in One Year – SGF