To compensate for its loss of influence in Africa, the German government is taking the occasion of the Ghanaian president’s visit in Berlin today to push for a rapid expansion of business relations with Ghana. This must be seen in the context of China’s growing influence on the African continent. Already sub-Sahara’s most important trading partner, China will most likely become the regions largest investor in the foreseeable future. Ghana plays only a secondary role among Germany’s trading partners in Africa, but it is viewed as a door opener to the African market. Within the framework of the G20-“Compact with Africa,” Berlin has concluded a “reform partnership” with Accra, intended to facilitate German investments in Ghana. The fact that Ghana’s President Nana Akufo-Addo needs foreign investors to fulfill his electoral promises is thereby seen as advantageous. To secure its influence, the German government is also intensifying its military relations with Ghana.

Last weekend, German Chancellor Angela Merkel reaffirmed the ambitious objectives of Germany’s current Africa policy, in view of today’s visit of the Ghanaian President Nana Akufo-Addo to Berlin. The sub-Saharan countries have long since lost their former significance for the German Federal Republic. Exports to the African continent constituted nearly 6 percent of West German exports in 1954; they decreased to 2.4 percent in 1990 and to a mere 1.8 percent in 2000, where they still stagnate. This is all the more significant, because one third of this small export volume goes to South Africa and another to Egypt and Algeria. Nigeria, Germany’s number two export destination south of the Sahara ranks 68th in the current list of German exports, behind Macedonia and just before Oman. Africa is also playing a limited role as a supplier of raw materials. This continent rich in resources is supplying only one tenth of Germany’s oil and gas imports and 15 percent of its metal ore imports. Germany is importing much larger quantities from Europe (oil and gas) and South America (metal ores).

This development could possibly be dismissed as a simple shift in the German economy’s export destinations, if it were not for such far-reaching political consequences. Whereas German business activities stagnate at a relatively low level, other countries have significantly and rapidly expanded their economic influence in the sub-Saharan countries – including Turkey, India, but particularly China. Today, the People’s Republic of China is by far their most important trading partner and will most likely become the continent’s largest investor in the foreseeable future. According to estimates, last year, only 1.9 percent of Africa’s new foreign direct investments were from Germany, whereas around 24 percent were from China. Building upon the People’s Republic’s extensive business activities, Beijing’s political influence has begun to grow enormously. This, on the other hand, has provoked the German government, which does not want to cede the leading position on the African continent to its Chinese rival. “Europe” must now unleash a strong “economic dynamic” in Africa, “analogous to the Marshall Plan in Europe in the aftermath of the Second World War,” declared Chancellor Merkel over the weekend: This should include “launching major infrastructure projects, support for start-ups, the development of the middle class.”[1]

Ghana is one of the African countries, with which the German government hopes to be able to make rapid progress. It is one of the African states with which Bonn – and later Berlin – usually had maintained prosperous political relations. Economically, it plays a secondary role among Germany’s sub-Saharan targeted countries – behind the heavyweights, South Africa and Nigeria. However, countries such as Ghana and Kenya, with which only a limited amount of trade takes place, are still considered to be comparably attractive door openers to other African markets, not least of all because of their relatively stable political conditions. With Ghana, the German government has reached a “Reform Partnership” within the framework of the “Compact with Africa” (german-foreign-policy.com reported [2]), which includes financial assurances of €100 million and, above all, is aimed at further enhancing the framework conditions for German investors in the country. Berlin sees this as a possible means for greatly enhancing the standing of German business in Ghana – and eventually in other African countries.

German President Frank-Walter Steinmeier visited Ghana in December to initiate this new German-Ghanaian trade.[3] His Ghanaian counterpart, Akufo-Addo has been on a visit to Germany since yesterday. Akufo-Addo has a personal interest in German investments. One of his electoral promises that won him the presidential elections December 7, 2016, was to institute free secondary education for the youth and to set up at least one larger enterprise in each of Ghana’s 216 districts, to curb the rural exodus to the cities. Free secondary education has already been introduced. For setting up enterprises, he desperately needs foreign investments.[4] Yesterday, Akufo-Addo participated in the 5th German-African Business Forum North Rhine-Westphalia in Dortmund. This morning he will be at a German-Ghanaian Business Forum to hold talks with interested companies. This forum is organized in Berlin by the Federation of German Industries (BDI), the German Chambers of Industry and Commerce (DIHK), the German-African Business Association (AV) and the CDU-affiliated Konrad Adenauer Foundation. Germany’s Minister of the Economy, Brigitte Zypries, who had accompanied Steinmeier to Accra in December, is also expected to attend.

In its efforts to ostensibly expand its influence in Ghana, the German government is using a multi-pronged approach. It is seeking to intensify not only its business, but also its military relations with that country. For example, it is supporting West Africa’s soldiers and police officers being trained for foreign interventions on the African continent at the Kofi Annan International Peacekeeping Training Centre (KAIPTC), inaugurated in Accra in 2003.[5] In addition, Ghana receives German military equipment aid. Between 2009 and 2017, Berlin had supported the creation of an engineer unit of the Ghanaian military with nearly €11 million. Berlin has also pledged an additional €8.2 million for the period covering 2017 – 2020, to include the creation of a mobile command post and capacity expansion in the field of military intelligence. The military relations are a suitable compensation for what, until now, has been seen as the meager economic influence – at least for the time being. 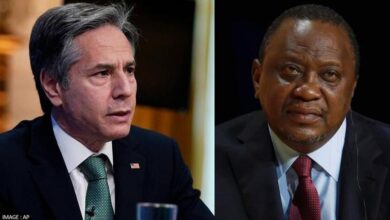 South Sudan accuses US of blocking path to country’s peace