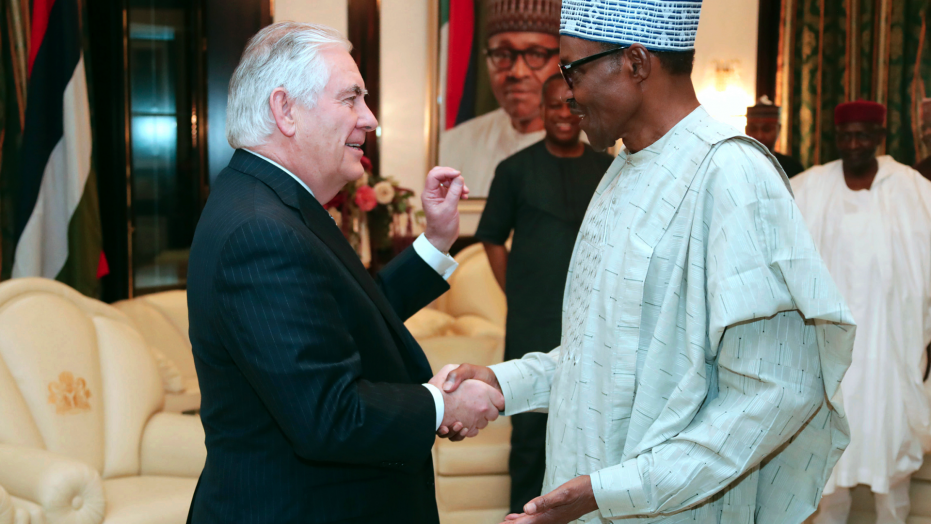 Former Secretary of State Tillerson with President Buhari of Nigeria

KAMPALA, Uganda –  Ask some Africans what they think of President Donald Trump and they just shake their heads. That sense of indifference appears to have deepened after Trump fired his secretary of state at the end of Rex Tillerson’s first Africa tour last week.

Tillerson’s visit was widely seen as a Trump peace offering after the uproar over his reported vulgar remarks about African nations and his administration’s neglect of the world’s second most populous continent. The former secretary of state had been seen as a restraining influence on Trump and had clashed with the president over several foreign policy matters.

Now many Africans are tamping down their expectations of Trump even more. The U.S. president has rarely spoken about any priorities for a continent where many of its 50-plus nations have long relied on U.S. support for everything from health care to security.

Tillerson’s trip to Africa, including to the headquarters of the continent-wide African Union, had been widely seen as an effort to repair damage to relations. Now, with his firing, some in Africa feel they are starting anew with the Trump administration.

Tillerson’s departure is a sharp indication of Trump’s less-than-positive attitude toward the continent, some say.

“That, in my opinion, is adding insult to injury,” said Ted Alemayhu, an Ethiopian-born American who is running for Congress to represent California’s 39th District.

While in Africa, Tillerson tried to project a more positive image of the continent, saying its rapid economic growth and fast-growing populations mean its future is increasingly linked to America’s.

He visited some of Africa’s most prominent economies in Nigeria, Kenya and Ethiopia and highlighted U.S. security issues with stops in Chad and Djibouti, the site of the only permanent U.S. military base on the continent.

Tillerson also sought to reassure African nations that aid would continue even as the Trump administration pursues deep cuts in foreign assistance, announcing at the end of his visit $533 million in humanitarian aid for countries such as South Sudan and Nigeria.

Nigeria’s foreign affairs minister, Geoffrey Onyeama, told The Associated Press that “we don’t see any change happening” in relations with the U.S. after Tillerson’s firing.

Bill Clinton created a signature trade program known as the African Growth and Opportunity Act, and George W. Bush launched an HIV treatment program, PEPFAR, that has boosted the quality of life for hundreds of thousands of AIDS patients across Africa.

Barack Obama enjoyed goodwill throughout the continent, even though some in Africa felt he fell short of expectations as the son of Kenyan man.

Trump has not indicated any possible initiatives for Africa.

Trump “has no need, as he has discovered,” to engage with the continent, said Timothy Kalyegira, a prominent social critic in Uganda. “The feeling is that he is a free agent. If he wants to visit Africa, it’s fine. If he doesn’t want, it doesn’t matter.”

Trump has not named an assistant secretary of state to oversee the continent, nor an ambassador to key countries like South Africa. And Africa got a mere seven paragraphs on the very last pages of Trump’s National Security Strategy.

That lack of attention has left room for other countries such as China to step up their influence.

With its offers of concessional loans that help finance the ambitious infrastructure projects of some African governments, China’s footprint is widening. And African leaders like Uganda’s Yoweri Museveni have said they would rather do business with a partner who does not lecture them about good governance and respecting human rights, giving China the thumbs-up.

In Djibouti, China’s development of its first overseas military base just a few miles from the U.S. base has illustrated the broader competition between the U.S. and China playing out across the continent.

Even as some argue that the Trump administration’s focus on Africa is notable in counterterror efforts if not in other issues, some Africans say they have given up on the U.S. president.

“Africans have nothing to take Trump seriously,” said Befekadu Hailu, a prominent Ethiopian blogger. “He already proved himself ethno-centrist and exclusivist, no friend to Africa.”