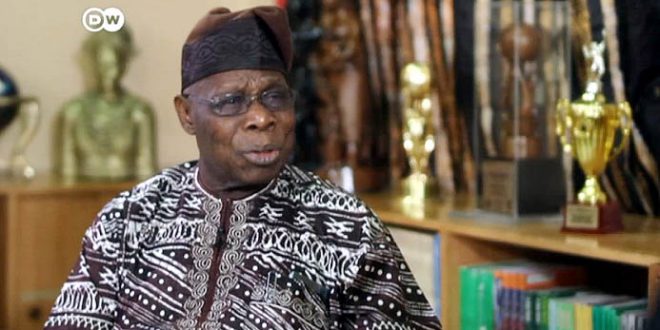 Former President Obasanjo during the interview with DW

President Buhari should not run for another term in office, ex-President Olusegun Obasanjo advised in a letter to Nigeria’s head of state in January 2018. In an interview, he told Deutsche Welle, DW, Germany’s international broadcaster on February 14, why he wrote the letter.

Nigerian Former President Olusegun Obasanjo is known for his public letters to sitting presidents. In 2013 he wrote a letter to Goodluck Jonathan condemning the widespread corruption in Nigeria. This was one of the key areas Muhammadu Buhari vowed to address during his time in office. However, the fight against graft seems to have been tougher than Buhari had calculated. According to Nigeria’s Supreme Court 1,124 corruption cases were brought before the country’s courts in 2017.

Obasanjo also addressed President Buhari’s ill health, which had prevented him from attending to state affairs for several months. The letter came at a time when Obasanjo launched his Coalition for Nigeria movement which he claims is not a political, but a socio-economic organization.

DW: In 2015 you decided to endorse the then opposition candidate Muhammadu Buhari. Now you heavily criticized him in a letter and urged him not to run for a second term. When you think back, was it a right decision to endorse Buhari?

Olusegun Obasanjo: Yes, it was the right decision. With the benefit of hindsight, you will agree with me, if you know what has happened and what has been revealed about the government of Jonathan and those who are with him, in terms of sordid corruption and you will agree that this was the right decision. I believe it that was a decision that was good at that time for our country and our democracy. Because we were able to transition from one party to another party. As a result of that we are consolidating democratic process. It is also the right decision now, for us to see that the man who is taking over from Jonathan has not met the expectation of Nigerians, that’s what democracy is all about. Democracy is about change. But if you think that is not the right decision, then you are not a democrat. But I am a democrat and tomorrow if I take a decision and things don’t work out the way we expect them to work out in a democracy, then you make a change.

One of the biggest promises of President Buhari was to fight corruption. That is his flagship topic. You are now saying that he turns a blind eye on corrupt people in his inner circle. Has Buhari’s corruption fight failed already?

I won’t quite put it that way. I would say he was probably looking outside, he wasn’t looking inside, because if you are fighting corruption [and] corruption is becoming rife then you also have to turn your attention inward.

What would you do differently if you were him in fighting corruption?

I would do what I exactly did before. I set up the two major institutions that are being used to fight corruption. I would make sure that the people who are in charge of these two institutions are men or women of integrity and I would look outside and inside because there is no point in fighting corruption beyond you while you have corruption (in front of) your nose.

Would you say is that you were more successful in fighting corruption?

I won’t judge myself. I will leave that to other people.

President Buhari is widely regarded as a man of integrity among most Nigerians. Is he lacking seriousness?

I don’t know which Nigerians you are talking about. Maybe Nigerians of four years ago. Talk to Nigerians today.

In your letter, you wrote that Buhari has a poor understanding of the dynamics of internal politics. You also said that he is weak in understanding and playing in the foreign affairs sector. Your critics are saying that they have the impression that you [feel you] are a moral authority and that you are the only person who understands how to run this country. What do you say to that?

I won’t answer them. I will reserve it as my right as a Nigerian.

You said in the past that you would pull out of politics. How does that go together with the new coalition movement?

A movement is a movement. It’s not a political organisation. It’s a social, economic organisation. And I have said that if that movement turns political, I will withdraw from it.

But you write that the two biggest parties in the country are unfit to run Nigeria. Do you hope to provide an alternative?

No, I would not stand in the way of that movement. If it decides to become a candidate sponsoring organization then it will become political and I will withdraw from it.

It is not yet clear who the members will be. And the names that got a lot of attention were the names people already know former governors, members of the [opposition] PDP (People’s Democratic Party). Some people have the feeling that it is not going to be a new innovative movement but think that it’s old people in new clothes.

Olusegun Obasanjo served as Nigeria’s president from 1999 to 2007, as well as Nigeria’s military ruler from 1976 to 1979. He has taken on the role of a senior diplomat, which has in the past included negotiating the release of the kidnapped Chibok girls and serving as a special UN envoy to resolve the crisis in eastern DRC. He quit the ruling PDP party in 2015 and recently launched the Coalition for Nigeria movement

The interview was conducted by DW’s Africa correspondent Adrian Kriesch.