South Sudan Opposition: Government Lacks Will to Work for Peace 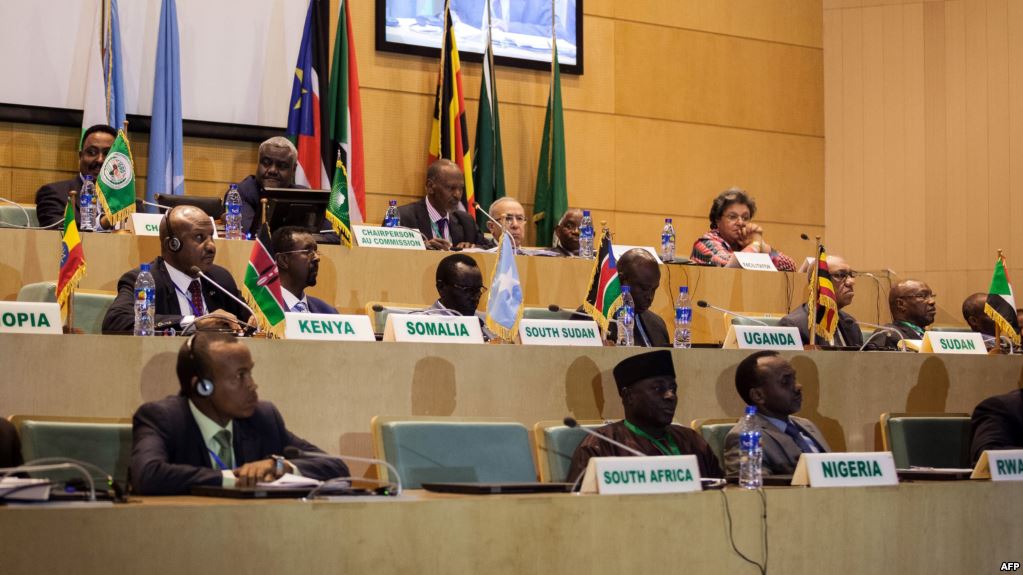 FILE – African Union Chairman Moussa Faki, second left at top, sits with members of the Intergovernmental Authority for Development as they attend a signing ceremony for a cease-fire agreement among South Sudanese parties to end the four-year war in the country, at the headquarters of African Union in the Ethiopian capital, Addis Ababa, Dec. 21, 2017. South Sudan peace talks were adjourned for several weeks on Feb. 16, 2018.

The Intergovernmental Authority on Development (IGAD) on Friday adjourned the South Sudan peace talks for three weeks. An IGAD envoy did not say why, but opposition parties questioned the government delegation’s commitment to finding solutions.

Opposition parties, civil society activists and faith-based groups have been attending the regional bloc’s meeting in the Ethiopian capital, Addis Ababa, for two weeks to discuss the road to peace in South Sudan.

Ismail Wais, IGAD’s special envoy for South Sudan, told delegates from the various South Sudanese stakeholders that his office would communicate a date for the resumption of the peace talks, dubbed High Level Revitalization Forum (HLRF).

“Today we shall postpone phase two of the forum,” he said. “But before we do so, I would like to take this opportunity to sincerely congratulate all of you for your patience and dedication to the revitalization process.”

Wais did not specify reasons for suspending the peace talks. However, nine opposition parties represented at the talks issued a statement accusing the South Sudan government delegation of lacking the “political will” to address core issues blocking the road to peace in South Sudan.

“We came to participate in the HLRF with an open mind and negotiate in good faith to usher peace to our people,” the statement said. “Unfortunately, our brothers and sisters in the government came to Addis Ababa to maintain the status quo and to accommodate the opposition group into bloated government.”

Speaking to VOA’s South Sudan in Focus from Addis Ababa, Kwaje Lasu, secretary-general of the South Sudan National Movement for Change, said the government delegation was not willing to end the violence in South Sudan.

Lasu also noted that when the so-called declaration of principles — the road map for the peace negotiations — were negotiated, “the government of South Sudan refused to sign” it.

South Sudan In Focus requested an interview with Michael Makuei, South Sudan’s minister of information and the government’s spokesman, but has not spoken to him yet.

The troika countries of Norway, the United States and Britain — the countries that funded and facilitated the 2015 South Sudan peace deal — issued a statement Friday throwing their weight behind the efforts of IGAD to end violence in South Sudan.

‘While useful dialogue has taken place over the past two weeks, there is much more for the parties to do if the HLRF is to make meaningful and sustainable progress towards peace,” the statement said.

The troika called on South Sudan’s various parties to reconvene as soon as possible, without preconditions, to address the security and governance arrangements essential for peace.

“We urge all parties to take steps to maintain the momentum of the process and refrain from comments or actions that could make returning to dialogue more difficult,” the statement said. “We urge the parties to agree that a negotiated arrangement for an inclusive transitional government that reflects South Sudan’s diversity is needed.”

The troika’s statement renewed its firm view that elections in South Sudan could not be viable in 2018, given the continuing conflict, lack of security, displacement of one-third of the population and severe food insecurity affecting half the population.

Lasu said the opposition parties were advocating for a lean and effective transitional government in South Sudan.