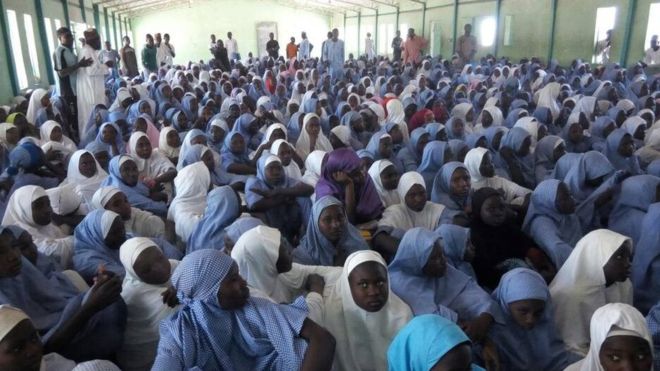 FEARS grew in northeast Nigeria on Wednesday about the fate of potentially scores of girls who have not been seen since a Boko Haram attack on their school two days ago.

The jihadists gained worldwide notoriety in April 2014 when they abducted 276 girls from their school in Chibok, in neighbouring Borno state. A total of 112 are still being held.

Monday’s incident sparked fears of a repeat and on Wednesday morning, February 21, some 50 parents and guardians gathered at the school demanding information.

“Our girls have been missing for two days and we don’t know their whereabouts,” Abubakar Shehu, whose niece is among those missing, told AFP.

“Although we were told they had run to some villages, we have been to all these villages mentioned without any luck. We are beginning to harbour fears the worst might have happened. We have the fear that we are dealing with another Chibok scenario.”

According to school staff, there were 710 students at the state-run boarding school, which caters for girls aged 11 and above.

Inuwa Mohammed, whose 16-year-old daughter, Falmata, is also missing, said it was a confused picture and that parents had been frantically searching surrounding villages.

“Nobody is telling us anything officially,” he said. “We still don’t know how many of our daughters were recovered and how many are still missing.

Police in the state, which is one of three in the northeast Nigeria worst-affected by the Boko Haram insurgency, said they have no reports of abductions following the attack.

Yobe’s education commissioner, Mohammed Lamin, said the school had been shut and a roll call of all the girls who have returned was being conducted.

“It is only after the head-count that we will be able to say whether any girls were taken,” he said.

Some of the girls had fled to villages up to 30 kilometres (nearly 20 miles) away through the remote bushland, he added.

Boko Haram has used kidnapping as a weapon of war since its insurgency began in 2009, seizing thousands of women and young girls, as well as men and boys of fighting age.