A tough year ahead for South Africa’s ANC 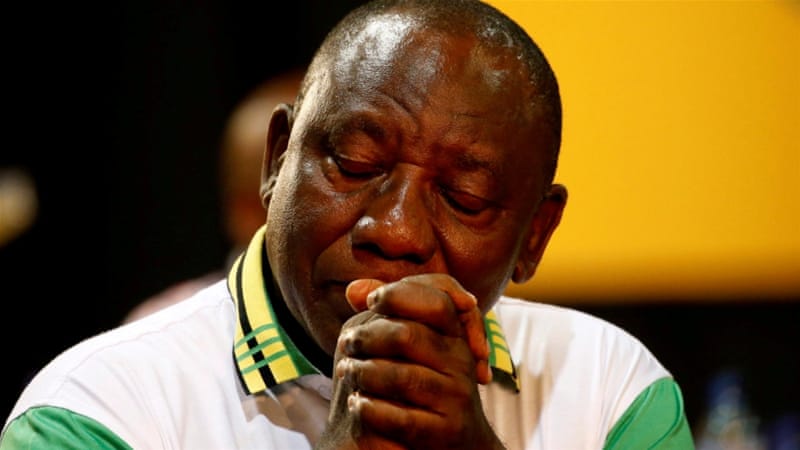 Cyril Ramaphosa, the newly elected president of South Africa’s governing African National Congress (ANC) is in a race against time to unite, renew and rebuild trust in Africa’s oldest liberation movement before the country’s 2019 national elections. This is going to be a hard task following the ANC’s decisive 54th conference where the party emerged as almost two separate parties.

The ANC under President Jacob Zuma, weighted down by corruption, scandals and government failure, have fractured, and lost electoral support in key cities and traditional constituencies. It is in danger of losing the next national elections in just over 12 months.

At last month’s conference, ANC leaders successfully managed to prevent the party from formally splitting into two, following the bruising party leadership contest between Ramaphosa and his losing opponent Nkosazana Dlamini-Zuma, the former African Union head and former wife of South African President Jacob Zuma. In 2018, the big challenge for Ramaphosa and the ANC will be to overcome the deep divisions between these factions.

Differences over whether to get former ANC President and current South African President Jacob Zuma out of the state presidency early in 2018 – as Ramaphosa wants to do – rather than let him complete his term – as the Dlamini-Zuma/Zuma group wants – is going to be the first obstacle the new party leader will be facing in the new year.

Ramaphosa knows that he needs to get rid of President Zuma as quickly as possible, preferably before South Africa’s political year starts in February 2018 with the annual State of the Nation address by the state president, if he wants to restore waning public and investor confidence in the ANC. Ramaphosa also needs to quickly take full control of the government, appoint his own Cabinet team and introduce his priority policies to restore public and investor confidence ahead of the 2019 elections.

However, because the pro-Zuma group has such a powerful grip on the ANC, Ramaphosa would not be able to fire Zuma immediately, but will have to negotiate an exit settlement, which may be protracted, as Zuma and his allies may want to secure safeguard guarantees. Furthermore, Dlamini-Zuma allies, given their strength, may demand they co-govern with Ramaphosa – meaning sharing appointments to Cabinet, government and state-owned companies. This may force Ramaphosa to appoint incompetent Dlamini-Zuma allies to key positions to maintain party unity, which may undermine his reform agenda.

If he wants to win back the declining support for the ANC, Ramaphosa needs to be seen tackling rampant corruption in 2018. However, he is likely to find this difficult to achieve without facing fierce resistance from Zuma and his allies. This may even cause the party to split in two, as Zuma allies still control at least half of the party.

The very first priority for the ANC will be to institute a commission of inquiry to investigate corruption, following a recommendation late last year by former South African Public Protector Thuli Madonsela. President Zuma has previously promised to do so, but has delayed setting it up.

What the commission of inquiry into state capture, if set-up in 2018, will investigate, will also determine whether the ANC will enter the 2019 elections even more divided than it is now. It is very likely that in order to unify the factions, party leaders from both groups will try to make the terms of reference of the commission as wide as possible, to also include corruption among South Africa’s white business community. This would give President Zuma a “dignified” way out of the myriad corruption probes currently involving him.

Resuscitating South Africa’s distressed economy should be another priority for Ramaphosa if he wants to restore the ANC’s fortunes. The country’s economy plunged into recession in the first quarter of 2017, with some global rating agencies having assigned it junk status. Unemployment is now close to 30 percent.

In 2018, Ramaphosa is likely to try to build a social partnership between government, business and trade unions, where each of the groups agree on a set of minimum obligations that would boost investor confidence. This is likely to be based on the blueprint created early last year, when Ramaphosa managed to unite business, labour and government to agree on a minimum wage.

However, it may be more difficult for Ramaphosa to convince ANC’s two main competing factions to agree on policies, as it is clear that Ramaphosa and Dlamini-Zuma/Zuma camps already differ deeply over core policies.

For example, at the ANC’s conference, the two groups clashed over a proposal to amend the constitution to allow expropriation of land without compensation. The dispute almost caused the collapse of the ANC conference. Pro-Ramaphosa groups rejected it, but it was eventually carried forward with the support of pro-Zuma/Dlamini-Zuma groups.

Although Ramaphosa at the end of the conference endorsed the expropriation of land without compensation – to honour the ANC conference resolution – many of his own supporters still believe that such an approach will undermine investor confidence, desperately needed to create jobs. Just a few months ago the ANC rejected a call by the Economic Freedom Fighters (EFF) to amend the constitution to allow for this kind of expropriation of land without compensation.

To amend the constitution to allow for expropriation of land without compensation before the 2019 national elections, will need a two-thirds majority in the Parliament. Even if the EFF vote with the ANC to help secure such a two-thirds majority, a vote is likely to split ANC MPs, as many pro-Ramaphosa MPs still oppose the measure. This means that the ANC may fail to secure the necessary two-thirds majority even with the EFF’s support.

Another 2018 battle between the Ramaphosa and Dlamini-Zuma/Zuma group will be over education. A day before the ANC conference, in an attempt to boost Dlamini-Zuma’s presidential campaign, Jacob Zuma proposed to make higher education free for poor and working-class students. The conference endorsed Zuma’s proposal, resolving that this measure must be “speedily” implemented. A special commission appointed by Zuma last year to investigate whether free higher education was financially feasible ahead of the conference said it was not viable at this moment and proposing alternative models should be investigated.

The National Treasury has said the proposal would be financially impractical right now, given the lack of public resources available, drop in tax revenue and public sector belt-tightening measures that were recently introduced. The Dlamini-Zuma/Zuma group would want to get the no-fee proposal implemented before the 2019 elections because it is a potential vote spinner among the poor – they would not care whether it undermines public finances and investor confidence.

This year, in order to maintain the unity of the ANC and to make sure that the party enters the 2019 national elections as a single body, Ramaphosa may need to slow down the organisational renewal of the ANC and the implementation of reforms that would tackle corruption and increase investor confidence in the party.