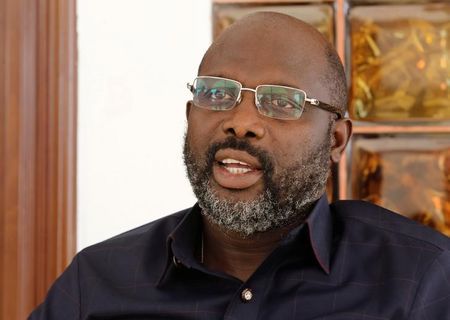 President-elect George Weah of the Coalition for Democratic Change (CDC) speaks during an interview with REUTERS at his residence in Monrovia, Liberia, January 2, 2018. REUTERS/Thierry Gouegnon/Files

Weah rode a wave of youth support to capture more than 60 percent of the vote in last Tuesday’s run-off, but he will need to manage expectations as he attempts to revive one of Africa’s worst-performing economies.

Seated outside his unfinished new house on a quiet dirt backstreet near the capital Monrovia, where a concrete sign announces, “Friends of Weah say welcome”, the 51-year-old ex-soccer star began to tentatively fill in some of the gaps in his vague campaign promises.

“I want for us to be self-sustained so we can export,” he said, appearing at ease in a dark blue dress shirt and gold watch. “The government has a responsibility to have agricultural programmes so people are able to grow their own food.”

“Ghana exports, our neighbouring countries export – we have the capacity to export,” he continued. “They export and we can do the same.”

Liberia spent years recovering from civil wars from 1989-2003 that killed hundreds of thousands of people and then was hit more recently by low prices for its chief exports, iron ore and rubber, and an Ebola outbreak from 2014-16.

More than 60 percent of Liberians depend on agriculture for their livelihood and multinationals like Malaysia-based Sime Darby have invested heavily in palm oil plantations. But the sector has languished due to low productivity, forcing Liberia to import more than 80 percent of its staple foods.

Weah has also made repairing Liberia’s hollowed-out infrastructure a priority. He grew up in Monrovia’s Clara Town slum and can look out on the derelict lots and gutted streets from the upstairs balcony where he spoke to Reuters.

“The roads for connectivity are vital. We have partners and we have revenue that we will make sure will come in to build our roads,” he said.

Weah, who starred for top European clubs such as AC Milan and Paris Saint Germain in the 1990s, has parlayed his rags-to-riches biography into political success but faces criticism that he lacks the experience and knowledge for the job.

He has in turn promised to surround himself with first-rate advisers and appealed to Liberians living overseas to return home.

“We will have economists who will put us on track. They will look at what is in the coffers and then work out how to move forward,” he said.

In the days since he became president-elect, security guards in sharp suits and ties have appeared outside the house and a new watch tower rises above 10-foot walls reinforced with barbed wire.

But Weah insisted that his new-found status would not go to his head.

“I don’t want my title to define my character,” he said as he walked the property, exchanging jokes with the staff. “I don’t think as a president I will change.”