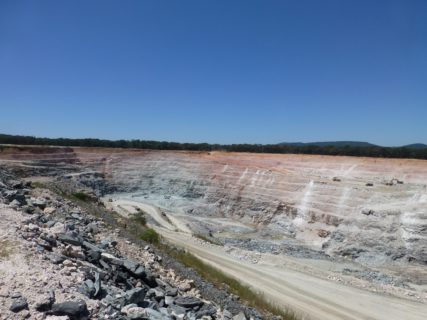 Kagem is the worlds single largest emerald mine in Lufwanyama Zambia

An emerald from the Kagem mine in Lufwanyama has been successfully
laser-inscribed with microscopic traceability information and a
personalised message in a world-first by the mine’s operator Gemfields
and its sister company Fabergé.

The 4.11 carat lively green emerald-cut gemstone was mined at Kagem
emerald mine in Lufwanyama, which is 75 per cent owned by Gemfields in
partnership with the Zambian government, which owns the remaining 25
per cent.

The gem was acquired and mounted by Fabergé as a custom-crafted item
for the successful winner of a charity auction held by the charity
mothers2mothers at Salma Hayek Pinault’s London home in November.
As part of the prize, the winners will also travel to Gemfields’

Kagem mine in Zambia to see for themselves the very source of their
unique emerald, as well as the mine’s community projects in place in
the area. The winners will also have the opportunity to visit the
local mothers2mothers initiatives.

The girdle of the emerald is laser-engraved with a secret message
chosen by the winner, the reference number of the gemstone’s Gübelin
laboratory certificate, and a Gemfields reference number.
Magnification of approximately 20x is required to read the
information. The laser-inscription process has no effect on the
colour, clarity or other characteristics of the gem.

Gemfields and Kagem CEO Sean Gilbertson said: “Gemfields is thrilled
to unveil another exciting advance, simultaneously supporting both the
traceability and the romance of precious coloured gemstones.
Gemfields’ belief that there is ‘A story in every gemstone’ is taken
to a new level by laser-engraving a personalised message on a gem. We
wish to thank the dynamic team at the AnchorCert Gem Lab for their
assistance with this project.”

In line with its industry leading approach to transparency,
Gemfields has previously announced innovations in improving gemstone
traceability. In 2015, Gemfields announced together with Gübelin that
Gübelin gemstone certificates could, at the request of Gübelin’s
clients, disclose on the certificate the identity of the party
presenting the gemstone to Gübelin for analysis.

In 2017, Gemfields and Gübelin unveiled a ‘paternity testing’
mechanism whereby un-cut gemstones could be tagged at source with
specially encoded nano-particles which would survive cutting,
polishing and treatment processes, allowing the mine-of-origin of the
gemstone to be determined years or decades later.

Gemfields is a leading supplier of responsibly sourced coloured gemstones.
Gemfields is the operator and 75% owner of both the Kagem emerald mine
in Zambia, believed to be the world’s single largest producing emerald
mine and the Montepuez ruby mine in Mozambique, one of the most
significant recently discovered ruby deposits in the world.