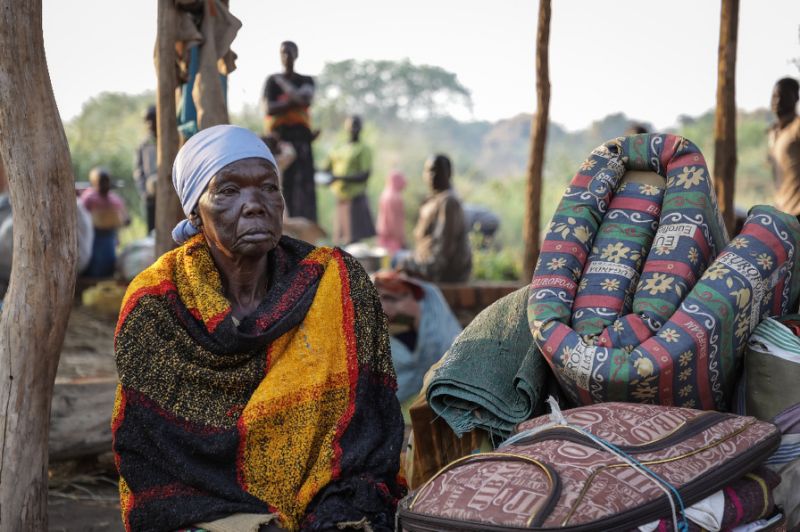 A newly arrived refugee fleeing from recent fighting in South Sudan waits for registration by the National Commission for Refugees (CNR) after crossing the border into the Democratic Republic of Congo, near Aba, on December 23, 2017 (AFP Photo/Simona FOLTYN)

Juba (AFP) – South Sudan’s government and main rebel group on Sunday accused each other of breaking a ceasefire that went into effect shortly after midnight.

The ceasefire is the latest bid to end a devastating four-year war which broke out after a falling out between former vice president Riek Machar and President Salva Kiir in 2013.

In a statement on Sunday, Machar’s rebel group the SPLA-IO accused government forces of launching an “aggressive attack” on their positions in the town of Bieh Payam in the north of the country, as well as positions in southwestern Yei county.

“These are all acts against the peace process as the government in Juba wants the SPLA-IO to respond so that war continues and they continue to loot the resources of the country,” said the statement from SPLA-IO spokesman Lam Paul Gabriel.

Army spokesman Lul Ruai Koang denied the incidents, instead accusing the rebels of “serious violations” of the ceasefire deal elsewhere in the country.

He said that the rebels ambushed an “administrative convoy that was trying to deliver food and salaries for Christmas” in the southern Amadi state.

“We broke through the ambush and we were able to kill five rebel fighters,” he said.

He also accused the rebels of attacking military police in Aweil East, in the northwest of the country.

The clashes have marred the latest in a series of ceasefire deals, signed between the government and several armed groups on Thursday and went into effect at 00:01 local time on December 24.

The agreement said all forces should “immediately freeze in their locations”, halt actions that could lead to confrontation and release political detainees as well as abducted women and children.

South Sudan’s leaders fought for decades for independence, but once they achieved it in 2011, a power struggle between Kiir and Machar led to all out civil war.

A peace deal was signed two years later but it collapsed in July 2016 when fresh fighting in Juba forced then first vice president Machar into exile.

The violence has killed tens of thousands and forced more than a million South Sudanese to flock to neighbouring Uganda and the Democratic Republic of Congo in what has become the biggest refugee crisis on the continent.

A permanent ceasefire is seen as the first step in negotiations to include a “revised and realistic” timeline to holding elections.