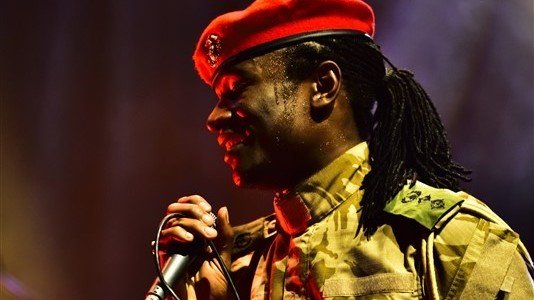 Zimbabwe’s bloodless coup, which took place in mid-November and brought to an end the 37-year rule of Robert Mugabe, certainly had its political casualties. With an uncertain future ahead the artist Jah Prayzah, born Mukudzei Mukombe, appears to be benefitting from a serendipitous album release, seen by some as prophetic of the dramatic November change.

Prayzah, born Mukudzei Mukombe on July 4, 1987, has seen his popularity spike as never before in the wake of Emmerson Mnangagwa’s ascendance to the presidency. Everyone, from the elderly to kindergartners, can be heard in the streets singing songs from Kutonga Kwaro, the album Prayzah released Oct. 13 — almost exactly one month prior to Mugabe’s ouster.

Prayzah’s fans describe Kutonga Kwaro as prophetic, as if the singer knew that the military — whose uniform he performs in — would imminently intervene in Zimbabwe’s political affairs. Indeed, some of the lyrics in its title track seem to be praising the military for seizing control: Prayzah laments, in the vernacular Shona language: “Behold, I am here, the soldier is ruling, he makes the orphans happy… ”

In another, “Ndin’Ndamubata” — which translates literally to “I have caught him, do you want to be happy?” — Jah Prayzah could appear, in hindsight, to be asking Zimbabweans if they are happy that Mugabe had been forced to vacate the presidency.

“Music is an art; people can have their own interpretations, but I always sing to make people enjoy the music and that’s it,” Jah Prayzah tells NPR.

Before his recent rise, Prayzah was openly threatened when a faction of the ruling Zanu-PF party still loyal to Mugabe accused him of singing songs positively portraying Mnangagwa. At one point, Prayzah arrived late to a show, causing fans to pelt him in what some of the people who attended described as “a politically motivated attack.”

After Mnangagwa was named by Zimbabwe’s ruling Zanu-PF party as successor to Mugabe following Mugabe’s forced removal by the country’s military, Prayzah — who was in Australia at the time — received a hero’s welcome at the recently renamed Robert Mugabe International Airport. A massive convoy of cars made up of fans playing his songs in their vehicles met his arrival, and the subsequent procession brought business to a standstill for a couple of hours in downtown Harare. Afterwards, Prayzah performed at Mnangagwa’s inauguration, held at the National Sports Stadium — which was filled to its 60,000-person capacity — performing several encores.

Commenting on the march that was held by Zimbabweans in support of the military takeover, Jah Prayzah said he was happy that there was unity of purpose in the country.

“I am overjoyed to see Zimbabweans coming together as one; I am happy that Zimbabweans marched in peace,” he says.

The question remains of what kind of leader Mnangagwa will be. As NPR’s Ofeibea Quist-Arcton reported, the former vice president oversaw the country’s intelligence services, which were often wielded by Mugabe to stifle dissent, sometimes violently. “We are celebrating, but we need to be cautious,” the journalist Andrew Meldrum told NPR. “This is not a revolution to bring reform.”

As the U.S. State Department wrote in 2009: “The ruling party’s dominant control and manipulation of the political process through violence, intimidation, and corruption effectively negated the right of citizens to change their government.” While the president has changed, the party, ZANU-PF, has not.

As a recording artist in Zimbabwe, Prayzah has another concern he’s equally unlikely to solve: piracy. Some street traders are reportedly making huge profits from copies of Kutonga Kwaro.

“I sell a minimum of 100 compact discs per day containing Jah Prayzah’s music alone, and that is good for my business. I know that he is not benefitting anything from the sale of his music that we reproduce illegally, but I have to eke out a living under the difficult economic climate that we find ourselves,” said 29-year-old vendor Kelvin Kamoto. “I have a degree in economics,” Kamoto claimed, “but I can’t find any work because of the country’s high unemployment rate. So the only source of income that I have is selling popular CDs.”

*Culled from NPR.Frank Chikowore is a freelance journalist based in Harare.