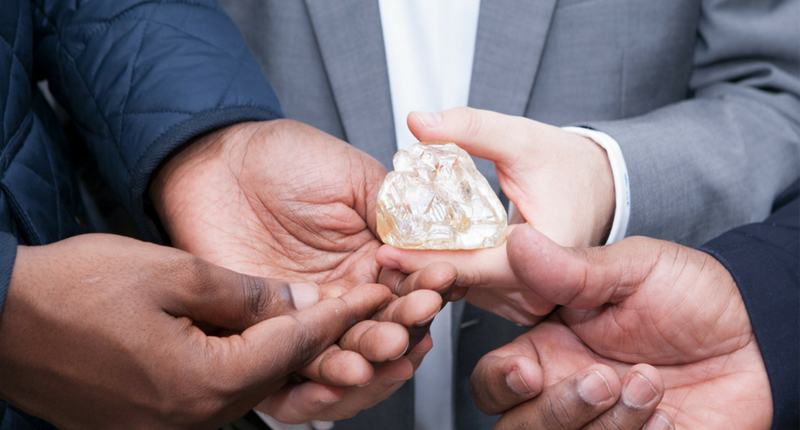 Half of the proceeds, $3.8m, will be used to fund infrastructure projects to benefit the community of the small village where it was discovered.

The Sierra Leone government rejected a bid of $7.8m at an earlier auction.

The government is now expected to use the money raised to improve conditions in the village of Koryardu, including the introduction of a fresh supply of water, electricity, roads, medical care and the building and maintenance of schools.

“The Peace Diamond bought by Laurence Graff will change lives even though it’s a shame the diamond hasn’t sold for a wildly expensive price,” the managing director of 77diamonds.com, Tobias Kormind, said.

The earlier bid of $7.8m was rejected by the government when the stone was initially auctioned in Freetown, after it said that the figure was too low.

The “peace diamond”, said to be the 14th largest recorded diamond in the world, was handed to the Sierra Leone government in March after it was unearthed by Emmanuel Momoh, a Christian pastor.

Mr Momoh told the BBC’s Newsday programme before the auction on Monday that selling the diamond to middlemen would not have “benefited the community”.

“We lack a lot of things. We don’t have a good road network … or drinking water,” he added.

The sale of the diamond was handled by Rapaport Group, which waived all charges.

The group’s chairman, Martin Rapaport, told Newsday that the sale could bring about a “sea change in the relationship between artisanal miners and the government” if the community is seen to benefit.

“It will encourage others to work with the government,” he said.

South Africa's Ramaphosa Gets Most Nominations Ahead of ANC Leadership Vote

Round Table for the Financing of CEMAC Integration Projects – Paris, 16 & 17 November 2020