Nigerian Senate President, Bukola Saraki, have stated that he believes ex-President Goodluck Jonathan although let corruption thrive during his administration, but was not a power hungry individual.

Saraki who added that he believes the fuel subsidy scam under the former president was the largest single case of corruption in the history of Nigeria.

He said almost N1.3 trillion was stolen through the scam which he witnessed as a senator.

According to the Senate President, “I brought the fraud to the attention of the former president who he said lightly waved it aside by saying  oil business is oily.”

Speaking at the book launch of a former Minister of Youths and Sports Development under the Jonathan administration, Bolaji Abdullahi, now spokesperson of the All Progressive Congress, APC in Abuja,

The book titled “On a Platter of Gold” was written on how Mr. Jonathan became president of Nigeria in 2011 but lost the office at the 2015 general election.

It detailed how Mr. Jonathan rose from being a university lecturer to becoming vice president under the late President Umar Yar’ Adua and then President of Africa’s largest democracy, in less than a decade.

“Most astonishingly is the fact that he won with the highest majority vote ever recorded in the nation’s history,” Abdullahi said, referring to the 2011 presidential election won by Mr. Jonathan.

Saraki said: “ I don’t think President Jonathan was someone who was desperate for power. He was not someone that was prepared for leadership. Yes, by misfortune or fortune I keep on saying, we all know the right things but we don’t do it. We find ourselves sometimes blaming individuals, blaming others than ourselves,”

“When I was a Senator, I came across this issue of fuel subsidy and the way the country was losing close to about N1.3 trillion. In the history of this country, I don’t think of any singular kind of level of corruption as huge as that. I had a motion I wanted to present on the floor of the Senate.

“I felt as a member of the ruling party at that time, it was only proper I discussed it with the President (first), maybe some action could be taken so that I would step down the motion.

“I booked an appointment to see Mr. President. I went with my paper. I started with the background of how people bring in petroleum products. I told him in the past people used to get award letters from NNPC to bring in PMS, DPK, and make 10, 20 per cent profit.

“I said Sir, they’ve taken it to another level now. They get an order to bring in products, they don’t want to make 10, 20 per cent anymore.

“I told him, thinking the would get very agitated. (But) He said: ‘Senator Saraki, you know this oil business is very oily.’

“I was stunned and taken aback!

“The second encounter was the day I decided I was going to contest to be President. I felt that I didn’t want Jonathan to hear it as news, I booked an appointment to go and see him.

“I didn’t know what I was thinking that day. I went to the Villa. He said: ‘Come in, come in, how can I help you?’

“I looked at the President of a third world country and said ‘Mr. President, I came to tell you that I am going to be contesting for your seat.’

“Jonathan looked at me and said: ‘Oh, okay, good luck.’

“If it were any other person, maybe I would not have left the Villa! But that again sums up Goodluck Jonathan.

“Its we Nigerians that produce the kind of leaders we get. No matter what you say about him, I don’t think he was someone who was desperate for power.

“He was not someone that was prepared for leadership. Yes, by misfortune or fortune I keep on saying, we all know the right things but we don’t do it, we find ourselves sometimes blaming individuals, blaming others than ourselves,” Mr. Saraki said. 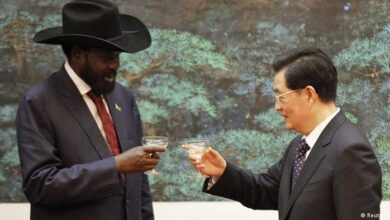