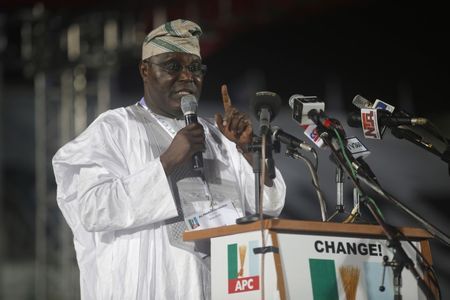 ABUJA (Reuters) – Nigerian former Vice President Atiku Abubakar, a leading ally of President Muhammadu Buhari, quit the ruling All Progressives Congress (APC) party on Friday, he said in a statement, a blow to government unity ahead of elections in early 2019.

Abubakar said the ruling party “has failed and continues to fail our people,” adding that the APC had instituted “a regime of a draconian clampdown on all forms of democracy within the party and the government it’s produced”.

The former vice president’s departure is one of the first major fractures to emerge publicly in Buhari’s APC, formed from a coalition of smaller parties to contest the 2015 election against then-president Goodluck Jonathan.

Both major parties, the APC and the opposition People’s Democratic Party (PDP), are struggling to maintain their unity in the run-up to Nigeria’s next presidential elections in February 2019, according to party members and experts.

The APC was brought together chiefly to elect Buhari, who campaigned on a platform of reviving Nigeria’s flagging economy, wiping out the country’s endemic corruption and defeating Islamist insurgency Boko Haram in the northeast.

But the Buhari administration’s successes have been limited, though Nigeria did climb out of recession in the second quarter of 2017, albeit slowly.