Harare – Zimbabwe has been gripped by an escalating spat between the president’s wife and his senior vice-president over a bizarre poisoning incident that has laid bare the pair’s ambitions to succeed President Robert Mugabe.

Though Mugabe has repeatedly condemned factionalism and refused to discuss his successor, his declining health and the looming 2018 elections have led to unprecedented jockeying for the top job.

The latest controversy erupted publicly when vice-president Emmerson Mnangagwa – widely known as “the crocodile”- was hospitalised in Johannesburg in August alleging he had been poisoned.

He did not openly speculate about what was behind his sudden illness at a party rally.

But Mnangagwa’s supporters allege he was struck down by poison-laced ice cream produced on a farm owned by first lady Grace Mugabe.

The pair have been locked for months in an increasingly bitter war of words over who should replace Zimbabwe’s 93-year old president.

They are widely seen as the two leading contenders.

In a rare television appearance, 75-year-old Mnangagwa on Thursday night forcefully rebuffed recent criticism from the country’s other vice-president Phelekezela Mphoko, who said the public row had undermined Mugabe.

“I never said I was poisoned in Gwanda but that I fell ill,” Mnangagwa said, referring to the location of the ruling party gathering, shortly after which he fell ill.

But in a dramatic twist to the saga that has transfixed Zimbabweans, Grace Mugabe also poured cold water on claims that she had a hand in Mnangagwa’s unexplained sickness.

“How could I possibly poison Mnangagwa? I am the wife of the president,” said Grace Mugabe in a Thursday night address to party supporters and government officials.

“What would I want from him that I don’t have? Why would I want to kill someone who was given a job by my husband? It is nonsensical.

“When you go around saying all nonsensical stuff it means you have failed the politics. You need to stay home.”

Mnangagwa has since recovered from his undisclosed illness.

Grace has publicly called on her husband to name a successor that analysts say she hopes will be her, ratcheting up tensions with Mnangagwa, a regime loyalist widely tipped to succeed Mugabe.

“We have definitely got two elephants fighting – we will see what happens to the grass,” said Derek Matyszak, a senior researcher at the Pretoria-based Institute of Security Studies.

“It’s a bit like the Cuban missile crisis – we are looking to see who blinks first.”

Mugabe has enforced strict discipline in his ruling Zanu-PF party for decades and avoided naming a successor even as concerns have grown over his advanced age and failing health.

But the open warfare between Grace and Mnangagwa has apparently left Mugabe furious.

In July, leading Grace ally Jonathan Moyo, the higher education minister, accused Mnangagwa of a “power grab” after he was pictured posing with a mug emblazoned with the words “I am the boss”.

In a video clip from Tuesday, Mugabe appeared to have refused to shake Mnangagwa’s hand at Harare’s airport in an incident that analysts suggest means “lines were crossed”.

“The level of this confrontation is unprecedented and it might have reached breaking point,” Matyszak said.

“Mugabe will be considering his options as to what to do about this Mnangagwa thing.”

Mugabe said last month that he may name a preferred candidate to replace him.

But the former liberation leader ruled out simply appointing his favoured figure and said his ruling Zanu-PF party must make the final decision.

The president has repeatedly condemned factionalism within his own party in thinly veiled rebukes to Mnangagwa and his wife’s public posturing.

Nigerian VP Osinbajo says running for presidency not 'on the cards' 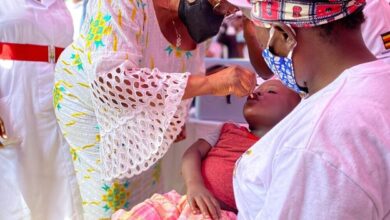