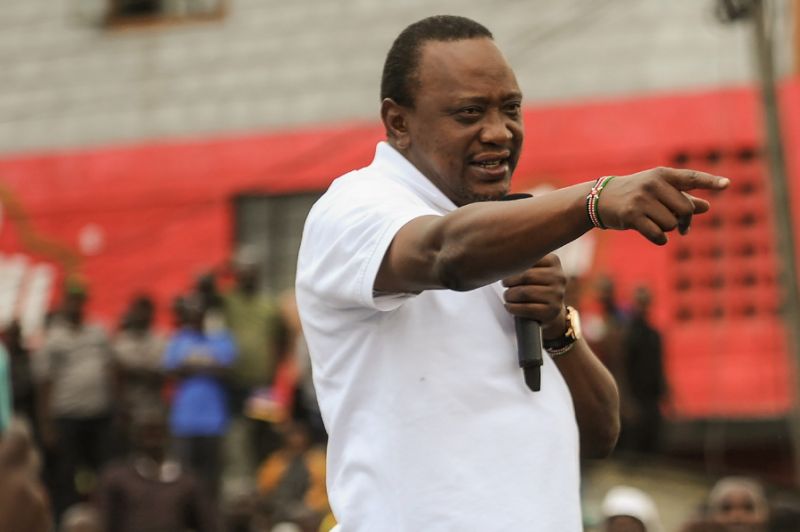 Uhuru Kenyatta — scion of the elite, but also a crowd-pleaser (AFP Photo/TONY KARUMBA)

Nairobi (AFP) – Uhuru Kenyatta, who is set to win a second and final term in Thursday’s election re-run, is the son of Kenya’s founding president and a man who epitomises the country’s elite.

The 55-year-old US-educated multi-millionaire, whose family owns an array of businesses, properties and land, followed in his father’s footsteps when he defeated his rival Raila Odinga to become president in 2013.

Their rematch in August was again won by Kenyatta, with 54 percent of the vote, but the Supreme Court annulled the election due to “irregularities” and ordered a re-run.

Kenyatta accepted the judges’ ruling but angrily, calling the judges “crooks” and threatening to “fix” the courts if he wins on Thursday — which is also his birthday.

Odinga has refused to participate in the re-run claiming it would not be free and fair.

As a result, Kenyatta is opposed by minor candidates who between them polled less than one percent last time around.

For his part, Kenyatta set to campaigning again with bellicose alacrity, touring the country and heaping derision on both the judiciary and his opponent.

“We are ready for an election whether he will be on the ballot or not,” Kenyatta said after Odinga withdrew, joking that nowhere in the constitution did it say, “Raila Amollo Odinga must be on the ballot.”

Kenyatta’s first term has been defined by big spending on eye-catching infrastructure and impressive economic growth in a tough climate.

But this has gone hand-in-hand with spiralling debt and widening inequality.

Terrorism has also been a consistent threat, with Kenyatta forced to address the nation in doleful terms after bloody attacks in 2013 and 2015.

The former finance minister and deputy prime minister was born in 1961, shortly after his father Jomo Kenyatta was released from nearly a decade in British jails and before becoming Kenya’s first president in 1964.

Educated at a private school in Nairobi and at Amherst College in the United States, Kenyatta is regarded as a leader of the Kikuyu people, the country’s single largest ethnic group.

He is married with three children and regularly attends Catholic church.

Despite his elite background Kenyatta has a common touch. He easily mixes it up with ordinary Kenyans, eagerly gets down on the dance floor and joshes in the local youth slang and, in his younger years, earned a persistent reputation for partying hard.

A leaked 2009 US diplomatic cable described him as “bright and charming, even charismatic” but warned that “Kenyatta’s liabilities are at least as important as his strengths. He drinks too much and is not a hard worker.”

Kenyatta’s political career is a case study in pragmatism.

In the 1990s, he joined with the sons of other independence heroes to call for democratic reforms but then became a close ally of autocratic former president Daniel arap Moi who had him nominated as the ruling party’s candidate for the presidency in 2002.

Kenyatta lost to fellow Kikuyu politician Mwai Kibaki but then backed Kibaki’s successful re-election bid in 2007, against Odinga who at the time was allied with William Ruto, now Kenyatta’s deputy and running mate.

The violent fallout from the disputed result led to the deaths of over 1,100 people and, eventually, to a power-sharing government in which Kibaki was president, Odinga prime minister and Kenyatta one of his deputies.

Kenyatta and Ruto were indicted by the International Criminal Court (ICC) for their alleged roles in orchestrating the violence.

But in 2014 the court dropped charges against Kenyatta — and later Ruto — citing the disappearance of witnesses and lack of evidence.

Despite, or perhaps because of the ICC indictment, Kenyatta and Ruto won the 2013 election, campaigning on a platform of nationalism, sovereignty and confronting imperialism in the form of the foreign court.

Kenyatta beat Odinga in the first round with a wafer-thin margin of 50.03 percent — a result Odinga disputed, unsuccessfully, in court.

Despite winning in court this year, Odinga has decided to sit out the re-run leaving Kenyatta effectively unopposed.

The poll will likely be the final act in a multi-generational political rivalry stretching back half a century to when Jomo Kenyatta and Odinga’s father, Jaramogi Oginga Odinga, vied for control of the nation.

Kenyatta must stand down after one more term and, at 72, Odinga is regarded as too old to make another bid for the presidency in five years time. Both men’s children are, for now, inexperienced in politics.