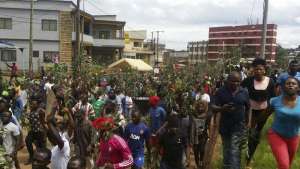 YAOUNDE, Cameroon, October 5, 2017/ — My teeth chatter and my knees quake. I’m sitting in a dark movie theater while my little one watches The Lego Ninja Go movie. A tyrant has a dysfunctional relationship with his protagonist superpower son who hates him for abandoning him as a child or trying to destroy the city. Something. The green Ninja, Lloyd, is grappling with an identity crisis even as he struggles to fight evil – his own father, albeit unbeknown to him.

Of course I may be missing key pieces of the plot. It’s Sunday, October 1, 2017 and between sitting here indifferent to onscreen Lego characters in whom my child revels, and reading an article a friend has circulated on Chimamanda Adichie’s brave exploration of depression, I decide to share the latter via twitter. That’s when I see the hashtags:

Someone tweets about being a dog, no, a bulldog who will fight for his people. Another presses that the government is suppressing speech to propagate genocide. Others yet lament the government shutdown of the internet in the Anglophone North West and South West Provinces, and announce solidarity with Togo. Ambazonia rings in my ears like Biafra. It’s the first place I go, heart thumping, whenever I hear a call for secession. I can’t seem to separate the two. I don’t know if reading Adichie’s article, which reminds me of Half of a Yellow Sun causes this Ambazonia/Biafra collision in my mind. But they’re there – interwoven – which is why my teeth chatter, my knees quake.

A few days ago, I fretted to my deeply concerned cousin about the strangeness of watching and reading what’s happening at home in Bamenda from the outside, as a diasporan. I have relatives and friends in Cameroon, in Bamenda. When I was in Cameroon for work last Christmas, I wanted to go home – home like where Pa was buried. Where Mama strapped a toddler me to her back as she sold bags of garri in Bamenda Main Market months before she slumped to the ground and never arose. Home like St. Joseph’s Cathedral where I took First Holy Communion, its towering statue of Jesus overlooking the bustling city. Home like where I danced in the rains that thumped against the ceiling-less roofs of cement houses from Old Town and Savannah Street to Commercial Avenue, Metta Quarters and Hospital Roundabout; where we washed clothes and pretend swam in “Ayaba wata”; where, as kids we trekked for seemingly endless miles to the farm in Njimafor and upon arrival, often ate guavas, mangoes, banga, and for lunch, ripe buttery avocados with boiled or grilled cassava.

Home as in the place where the nuns of the Holy Rosary tried to show me the confluence of science, math, literature, their version of woman-ness and a distorted history where European explorers discovered a country that had been in existence for thousands of years. That home where I had my first crush at Atuakom Primary School and my first kiss as a teenager – a sensation which reminded me of the supple sweetness of mid-season fresh Number Four mangoes. The place where Pa, a lorry driver met and married Presbyterian Ruth whose name he changed to Rose upon their marriage in the Catholic Church. From them came my mother and her siblings.

See, I’m a graffi child – born of the grasslands and of graffi parents, but birthed in the capital city of Yaoundé, which is also home. But in a different way. In a way that challenged my French, that sometimes called my graffi people “Anglo-Fou,” that unwittingly perhaps, introduced me to trilingualism. It was also the place that gave me space to run free under the drying lines in Cite Verte, to shop second-hand clothes in Marche Mokolo, to lean closely against my aunt as she fried puff-puff on the roadside, to sit in Cinema Abbia staring at Kate Winslet and Leonardo DiCaprio in that frigid water with the wide eyes of an imaginative teenager. It was the home that taught me difference – Anglophone and Francophone, who knew people and who didn’t, who had what and how much and who didn’t. It also gave me a taste of the libertine, teaching me to live with the urgency of my last day on earth. But that birthplace was an adopted home – as though I first shrieked out of Mom’s womb there, but my umbilical cord was carried across the River Sanaga to graffi land, to Bamenda and buried there. And with it, my me-ness.

Last December, I could go to my birthplace and to Douala, but not home. Roads were blocked and travel banned I was told, even though it was only a few days before Christmas – a time when families across the country unite in communion. Cleverer, more determined, perhaps braver people risked the journey. The more cautious like me obeyed. I was there for work after all, I reasoned, and we had no office in Bamenda. I had a child to protect too. During times like these, you tell yourself things, truth or otherwise, to self-preserve.

Still, I wanted to see the old house on Savannah Street again, visit my alma mater, pray at the grotto of our Lady of Fatima on the cemetery grounds behind St. Joseph’s. Mostly, I wanted to reunite with relatives I hadn’t seen in nearly two decades, and put wreaths on the graves of everyone I’d lost since I left home. I wanted to smell the eucalyptus trees near Queen of Peace Catholic Church and tear off their peeling backs just to watch the brown liquid slide down its sides. I’d always imagined my roots sank as deep as those trees and I’ve dreamed of hearing the roar of the Mezam falls underneath the bridge on the road to Mankon. Because I couldn’t go home, I visited my birthplace. Strolled up and down Boulevard du 20 Mai, ate suya at Briquetterie, danced in Sanza, rode around the city so I could remember which roads led where, which corner streets I’d played on, whether women still sold grilled corn with plums and poisson braises at Chapel Nsimeyong, whether my childhood house, blue but disguised in brown dust still overlooked the valley between Nsimeyong and Biyem-Assi.

My teeth chatter and my knees quake because that homecoming was only partially so. I vacillated between the thrill of being back on Cameroonian soil and dismay as I watched people and myself eat out, drink, prepare for Christmas as though black smoke wasn’t rising to the skies in Bamenda. As though the reports of students and young people being shot by soldiers in Buea had nothing to do with us. Nothing to do with me. Life went on as protests resulted in murder, maiming, imprisonment. Life went on while thousands of Anglophone children sauntered between the house and yard wondering when they’d be back looking up at chalkboards from their wooden desks; while silence crept into town, and streets lost their music and marketplaces their magic. I read about these things from newspapers, Whatsapp, Facebook and felt like I’d been there. Like I knew it. Because I did know it. I had been there. 1992. I’m reminded: Past is prologue…

In 1992/93, as Bamenda called for multipartism and a National Conference, I watched Takembeng, their sagging, warrior, other-worldly, dare-you-to-move bodies fan out across the street to prevent soldiers’ trucks from riding through town. I remember the smell of tear gas peppering my nose, its whiteness sometimes merging with the vast skies, dispersing crowds of angry youngsters demanding change. I remember the hush that befell the loud city on curfew days and how the clanging of the 5 p.m. bell at St. Joseph’s sent people rushing home before the 6 p.m. curfew. I remember the bush lamps and candles around which we gathered in the kitchen or parlor of Pa’s compound, telling stories in hushed tones, restraining laughter, hoping there would be no knock on Pa’s door.

They say Lagos danced while Biafra quaked. The world ate while Rwanda bled. Brazzaville drinks while Po disappears. It is not necessarily cruelty or hate – those command too much energy. It is indifference – a kind of willing unknowing. It is watching the neighbor’s wall collapse, thinking, at least it’s not mine. Douala, Yaoundé, Ngaoundere, Bafia rise with the cock crow. They wash their faces and greet the day. They may even listen to the news and shake their heads or nod while Anglophone Cameroon fights a chokehold. The origins of which are foreign – the languages foisted upon us by man adventurers seeking thrills and conquests. So my teeth chatter wildly and my knees quake up a storm.

While blood stains color alleyways and groans fill the dense prison air, I search for my voice, wring my hands, lie in the comfort of my bed and sipping Sauvignon Blanc, shrug. What can I even do I say – a complicity to be sure – even as a mightier wrath than ’92 sweeps over my home, and black smoke kisses the sky from myriad streets in Bamenda and Buea and Kumba.