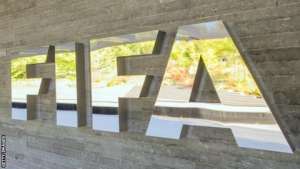 Gabon fielded an ineligible player – Merlin Tandjigora, who should have been suspended – in the 3-0 home defeat by Ivory Coast on 2 September.

The Panthers effectively escape with a fine as the main sanction for the error is to forfeit the match 3-0.

Meanwhile, the Nigeria Football Federation has been fined just over US$30,000 and issued with a warning after fans invaded the pitch when they beat Cameroon 4-0 on 1 September.

DR Congo were also given a warning and also handed a major fine, forced to pay Fifa around US$20,000, for incidents during their match against Tunisia on 5 September.

Fifa ruled that there had been “improper conduct among spectators – throwing objects [bottles] and letting off incendiary devices” at the match, which ended 2-2, in Kinshasa.

The Congolese federation was also sanctioned for failing to fly national flags at the stadium and for not displaying a mandatory “central advertising board”.

There was a US$15,000 fine and a warning for Mali after their home match against Morocco also suffered from “improper conduct among spectators – throwing objects [bottles and chairs]”.

Elsewhere, Zambia must pay US$7,000 after their fans threw objects when they played Algeria in Lusaka.

Morocco’s punishment of US$3,000 and a warning was given after spectators whistled during the national anthem ahead of their match against Mali in Rabat.

Both Burkina Faso and Senegal were issued warnings for delayed kick-offs in their matches against each other on 2 and 5 September respectively.

And South Africa’s Erick Mulomowandau Mathoho had his suspension for a straight red card against Cape Verde increased from one match to two and also fined US$5,000.

He was dismissed in Praia for kicking out at an opponent after the ball had already gone into touch and missed the return match a few days later through suspension.

The increased ban means Bafana Bafana coach Stuart Baxter had to drop him from his squad to face visiting Burkina Faso on Saturday.

He has been replaced by Cape Town City captain Robyn Johannes, who has earned his first call-up since 2008.