Politics has been central to the progress, or lack thereof, in developing East Africa’s oil. And it will continue to be.

It was not long ago that East Africa was the shining frontier of the continent’s oil scene. Uganda sparked the rush in 2006 after wildcatters ventured deep inland and made Africa’s largest onshore discoveries in decades. And Kenya’s north­western Turkana region continued the run with new oilfields found in 2012.

With crude prices averag­ing almost $112 per barrel at that time, it was hoped these fresh discoveries could be linked up with a new regional pipeline network stretching from South Sudan to the coast. It was believed that oil could economically transform the East African region.

Yet a decade on, little progress has been made on the pipeline, while Uganda and Ken­ya’s oil remains trapped far from interna­tional markets.

Security risks have hindered developments, while the steep drop in crude prices from late-2014 has slowed things down. However, politics – both domestic and regional – have also been central to the delays.

In Uganda, where government estimates suggest reserves of 6.5 billion barrels, a consensus has now been reached to develop an export pipeline by the early-2020s . But this has only come after various disagreements deferred developments.

It took years, for example, for Presi­dent Yoweri Museveni to back down from his original idea of meeting East Africa’s petroleum needs through a large-scale oil refinery. This was widely regarded as an uneco­nomic proposition and a smaller-scale option has now been accepted.

Progress was also stalled by a series of drawn out tax disputes in Ugandan and London courts. However, it was Museveni’s hard bargaining with international oil companies over the terms of production licenses that brought things to a crawl, with the two sides finally reaching an agreement in August 2016.

To his credit, Museveni has provided Uganda with a relatively favourable deal. But it came at the cost of delaying oil production for several years.

In Kenya, after much fanfare following its first oil discovery, there have only been mar­ginal exploration gains of late. Estimates of recoverable oil in the South Lokichar Basin of the Turkana region have now risen to 750 million barrels according to operator Tullow.

Nevertheless, low-cost onshore oil continues to draw in big players from the global energy industry. Just this week, the French oil major Total entered the scene after acquiring Maersk Oil and Gas, along with its Kenyan assets. Alongside partners Tullow and Africa Oil, it will look to bring Kenyan oil to international markets.

However, an unhealthy relationship between local and national politicians could present an impedi­ment to production. This was most recently demonstrated in the August 2017 elections. During the campaign, President Uhuru Kenyatta sparred with Turkana governor Joseph Nanok over the president’s refusal to sign a bill that would grant the county a high share of oil revenues.

Turkana been neglected by Nairobi for decades, and local politicians are now wrestling to control new resources brought in by oil develop­ment. This led to a suspension of oper­ations for several weeks in 2013 due to local protect, and again in June this year as locals blocked roads and seized oil company assets.

In Turkana, grievances over a lack of jobs and development will not go away because the election season is over. Kenyatta will need to work towards a compromise with county politicians and local communities if the industry is to make further progress.

Since its separation from Sudan in July 2011, South Sudan’s oil industry has been severely undermined by political interven­tion and armed conflict. Oil production was around 350,000 barrels per day around the time of independence, but only 130,000 barrels per day in early-2017, accord­ing to government officials.

The government has ambitious plans to more than double the current produc­tion rate, but South Sudan needs a significant period of internal stability before oil companies will be willing to take the risk to invest in revitalising its aging oilfields. Without investments in enhanced oil recovery or significant new discoveries, output from South Sudan’s current oilfields will not reach pre-civil war highs again.

The best prospects for new oil are in Jonglei state. But the large, isolated and unstable region is hardly a desirable destination for low-cost, risk-free exploration. Total has been flirting with exploring there for decades. It was recently in fresh talks with the government, along­side partners Tullow Oil and the Kuwait Foreign Petroleum Exploration Company (KUFPEC), but negotia­tions broke down in April.

Beyond ongoing domestic challenges, regional relations have also emerged as a complex challenge. In landlocked Uganda, this has centred on whether to opt for a pipeline to the coast through Kenya – via Turkana’s oil reserves – or through Tanzania.

It was only after years of wrangling with the former that Uganda recently announced construction would soon start on a pipeline through the latter. The plan is that the estimated $3.9 billion, 1,443km pipeline will run from Lake Albert down the western edge of Lake Victoria and to the Tanzanian port at Tanga.

If the decision holds, it means that East Africa may eventually have to construct two separate pipelines. Uganda could have saved the region costs by joining up with Kenya’s pipeline, but it was concerned about security and delays from land disputes in Kenya’s restive north. Kampala was also keen to avoid over-dependence on Nairobi as its dominant trade gateway.

In its bid, Tanzania offered to lower tariffs on the pipeline to competitive rates. It presented a more feasible timetable, fewer land acquisition constraints, and lower security risks.

However, this option will not necessarily be problem free. Over the 30-40 year lifespan of the oil production, politics in both countries will certainly shift, and Tanzania could take advantage of its position as Uganda’s only transit route.

The wildcard in the region’s pipeline politics will be whether Total – given its recent entry into Kenya and majority stakes in Uganda – revives the idea of building a pipeline from Lake Albert to the Kenyan coast, and ditching Tanzania altogether.

Depending on how this pans out, Kenya may still need to go it alone in building its own pipeline. President Kenyatta says a route from Turkana to Lamu will spur development in the marginalised region and that new economic opportunities will dampen security con­cerns. However, others fear that political elites are looking to further enrich themselves through land grabs in the north.

In any case, the persistence of lower global oil prices means that, in absence of a new deal with Uganda on a regional pipeline, Kenya will likely need to discover more oil if investors are to see financing a Kenya-only pipeline as a fruitful ven­ture.

South Sudan may have attained political freedom in 2011, but it is still dependent on a pipeline through Sudan to export oil, the government’s main source of rev­enue.

A deal was struck late last year to extend the arrangement between Juba and Khartoum until the end of 2019. The agreement includes a sliding scale for transit fees, which will help ensure that South Sudan does not run a loss when global prices are low.

However, the political relationship between the two Sudans is anything but stable, as the short border war in 2012 demonstrated. Khar­toum may attempt to extract new political and economic concessions from South Sudan when the current agreement expires. 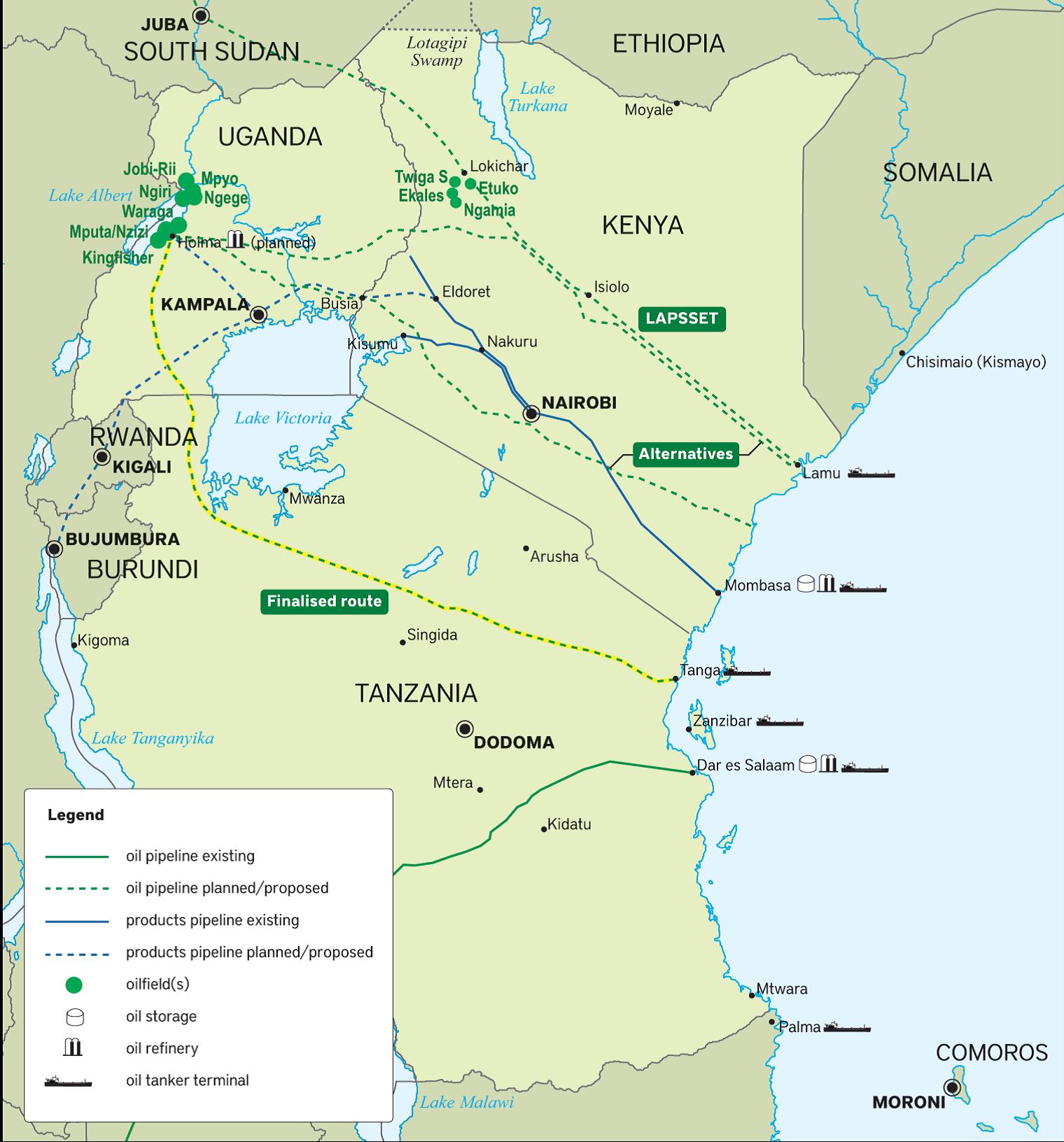 After years of domestic and regional political wrangling, some progress may be being made in terms of extracting and exporting East African oil. But many disputes are yet to be resolved, while others may still heighten uncertainties.

The undefined and porous borders across Africa, for instance, could lead to further quarrels. Uganda’s exploration on the borer of Lake Albert is already being protested by the Democratic Republic of Congo. Meanwhile, Kenya’s push for maritime exploration in the Indian Ocean is being contested by Somalia.

The implementation of international rulings on disputes elsewhere in Africa – for example, between Nigeria and Cameroon – could set important precedents in solving such border disagreements.

Over a decade on from the initial discoveries, East Africa’s oil is still yet to deliver on its promises. There have been many factors behind the delays, but many have been caused by domestic and regional politics, both of which will continue to be central in determining the success of new growth opportunities.

*Culled from African Arguments.A version of this article was originally published in the Petroleum Economist.Luke Patey is senior researcher at the Danish Institute for International Studies, lead senior research fellow at the Oxford Institute for Energy Studies, University of Oxford, and author of The New Kings of Crude: China, India, and the global struggle for oil in Sudan and South Sudan (Hurst, 2014). Follow him on Twitter at @lukepatey.

Runners and riders: Liberia gears up for most unpredictable elections yet

The Parable of The Terrorist, The Zoo Keeper and The Python

The 4 most under-reported stories on the COVID-19 pandemic