DAKAR/LOME (Reuters) – The leader of Togo’s main opposition alliance said on Friday that President Faure Gnassingbe must quit power immediately or protests against his family’s 50-year ruling dynasty would continue.

Thousands of people have taken to the streets in the past three days to demand that Gnassingbe step aside, in the most serious challenge to his family’s stranglehold on power since the death of his father in 2005.

Police used tear gas to disperse protesters who were burning tires in Lome’s opposition stronghold of Be on Friday, a Reuters correspondent said.

“He has to leave now. We will not accept him staying on any longer,” Jean-Pierre Fabre, head of the National Alliance for Change, told Reuters by telephone.

“The Togolese are tired … We will continue to protest.”

It was not immediately possible to reach Gnassingbe’s office. Text messages and phone calls were restricted and the internet has suffered outages.

A short government statement on state TV merely acknowledged the protests and said that 10 people had been injured in them, of which eight were security forces and two protesters.

But unrest was less widespread than in previous days and traffic had resumed in some areas of the seaside capital amid a heavy police and paramilitary presence. By evening there were no further reports of protests, which seemed to have died down, a Reuters witness said.

The president’s father Gnassingbe Eyadema seized power in a coup in 1967 and ruled for 38 years before his death.

In response to protests, he introduced a 1992 constitution that brought in notional multi-party democracy and limited presidential terms to two. Ten years later, lawmakers scrapped the term limit so Eyadema could run for another term.

When he died in 2005, the military installed his son instead of the national assembly head as was legally required, triggering protests in which at least 500 people were killed.

Fabre, a French-educated former economics lecturer and newspaper editor, lost to Gnassingbe in disputed presidential polls in 2010 and 2015. He told Reuters that another election would not be fair unless major reforms were made.

Gnassingbe’s government this week sought to appease its opponents by tabling a draft bill to reform the constitution and reintroduce a two-term limit, but opposition leaders reject it because it could still enable Gnassingbe to rule until 2030.

The president, who has encouraged investment to try to turn his tiny nation into a business, banking and shipping hub modeled on Singapore or Dubai, has a mandate due to expire in 2020. But Fabre said even that was too late for him to leave.

“We can’t accept that. This is a question of liberty,” he said. “The resistance is now organizing itself … We are very numerous.”

He also called on all parties “to preserve peace and security”.

Chambas, who met with Gnassingbe on Thursday, has delayed his departure and is staying in Togo for further discussions, his spokesman said.

“I remain convinced that all parties want to move forward on the reforms … in order to reach a consensus to respond to the legitimate expectations of the Togolese people,” Chambas said in a statement.

Since Gambian autocrat Yahya Jammeh was forced out after losing an election last December, West African countries have become unanimous in accepting two terms as the limit on presidential office — the only exception being Togo.

Security forces appear to have avoided bloodshed so far this week, but Amnesty International condemned security forces for firing tear gas at and beating peaceful protesters, and for an “unjustified attack on internet freedom.”

Tony Elumelu: why Africapitalists will build a continent’s future

The internet is obsessed with these South Sudanese beauties 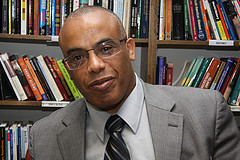