FILE – Illegal Zimbabwean immigrants who work as farm laborers are seen inside their room on a farm near the Beitbridge border post, between South Africa and Zimbabwe, in the Limpopo Province, in March 2006.

South Africa has extended the residency permits for nearly 200,000 Zimbabwean economic migrants by four years. Their current permits were set to expire December 31, which had raised fears of mass deportations.

Home Affairs Minister Hlengiwe Mkhize said the government is extending the permits due to worsening economic conditions in Zimbabwe. She stressed that these are one-time extensions, not a path to permanent residency.

“I trust that [this] will go a long way in assisting the Zimbabweans to rebuild their lives as they prepare at work, in business and in educational institutions for their final return to their sovereign state Zimbabwe in the near future,” she said.

As many as 1.5 million Zimbabweans have migrated to South Africa in recent years, seeking to escape Zimbabwe’s chronically struggling economy. 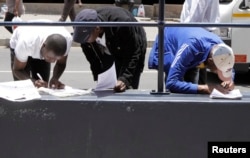 The extended residency permits are available only to the nearly 200,000 Zimbabweans who were granted amnesty in 2010. Those who are eligible must show proof they have a job.

Still, many Zimbabwean migrants are breathing a sigh of relief. Economic conditions back home have left many of their families dependent on the remittances they send.

“We had hoped, though, that the minister was [also] going to include those undocumented Zimbabweans that are working in South Africa,” said Ngqabutho Mabhena, chairman of the Zimbabwe Community in South Africa organization. “But at the same time, we welcome this statement. We are calling on all holders of Zimbabwe special permit, to apply within the time set by the minister.”

Relations between Zimbabwe and South Africa have dipped in recent weeks due to unrelated issues. Pretoria’s decision to grant Zimbabwe’s first lady diplomatic immunity after her alleged assault of a woman while in Johannesburg is being challenged in a South African court.