DISCLAIMER: The story you are about to read is a work of fiction. Any resemblance between the characters in this story and any persons, living or dead, is either coincidental, a miracle or probably a figment of your imagination. 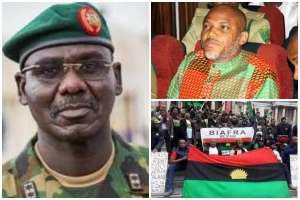 Once upon a time, 16 years after the Zoo returned to civil rule, there lived a terrorist named Mazi Kanu and his terror squad, the IPOB. Unlike most terrorists of his time – like Alhaji Shekau who led the Boko Haram sect which ran rampage in North Eastern part of the Zoo, Bin Laden who brazenly attacked Uncle Sam in 2001 and was killed for it years later, Al Baghdadi who ran the show in Syria and Iraq or even the Al Shabaab brothers in East Africa — his terror was mostly verbal. He threatened to destroy the Zoo and lead the Igbo to a prosperous future. To most people East of the Niger, his words were infallible. He had a radio station he had been running for a couple of years from his base in the UK. He spat fire, assuring his hypnotised listeners that the Zoo Keeper will be defeated. He sought to purchase arms to fight the Zoo… some in public places, some in private quarters. To many, the words from the mouth of The Terrorist were law and his cry for war on the Zoo was doctrine. In all this, the Zoo Keeper said nothing.

The Zoo Keeper, a man in the twilight of his earthly sojourn, seemed to be internally bitter and for many reasons: Not only had he just gained control of the Zoo after a long 12-year battle, his camp was getting divided gradually as a result of conflicting interest. Add to this the economy was crumbling with his country heading for recession. Like this was not enough, a new terrorist was in town. He was already battling Shekau and The Avengers but this new terrorist reminded him of something he probably didn’t want to remember. Years earlier, the Zoo Keeper was part of a bloody war against Kanu’s people in which over 2 million Igbos died. So he determined in his heart to decisively tackle this new terrorist. As fate would have it, the terrorist returned home and within a few hours, he was arrested and kept in custody until further notice.

2 years down the line, the Zoo Keeper had become terribly ill. His deputy, Mr. Osinbade held the reins for a while in his stead and was getting the support of the people. In the meantime, IPOB kept waxing stronger, getting new friends and winning the support of some influential people. The Zoo Keeper returned and after another period of litigation, The Terrorist was from his jail cell with several strict conditions. This seemed to be victory for The Terrorist and IPOB as they became even more daring and outspoken in their optimism of a future free of the Zoo’s grip. The Terrorist soon forgot the conditions for his release and continued from where he stopped; threatening the unity of the Zoo and constantly insulting the Zoo Keeper, only this time, he removed the drums of war and replaced them with a cry for referendum. He even assembled a Secret Service and started a mini-government of his own.

Soon enough, the Zoo Keeper was back in good health and returned back to the Zoo after spending over 100 days away. His return did not stop The Terrorist as he kept galvanizing his followers towards the day they face-off with the Zoo and the Zoo Keeper. Without wasting much time, the Zoo Keeper swung into action using his favourite pet, the Python!

The Python, merciless and efficient as always swooped on The Terrorist and IPOB, invoking fear across Igboland. The Python danced its way around, striking whatever was in its way… and an uneasy peace was restored in Igboland.

But the last is yet to be heard from The Terrorist. I say this because the same scenario played out in the Middle East when George Bush warned that if Uncle Sam leaves the region prematurely, he will come back to fight an even angrier enemy. His advice was dismissed and the American army left. Only to return years later to fight an even angrier ISIS led by the blood-thirsty Al-Baghdadi.

A little advice for the Zoo Keeper and the Python: listen… listen to anybody and everybody, please:

Listen because it would be disastrous to feel that you have finally calmed the storm. You might have won a temporary battle, but the Python will not always be in Igboland. It is my prayer that you do not come back to Igboland to fight a bigger, even angrier enemy