Mandela Blamed for Leaving The Country to Whites 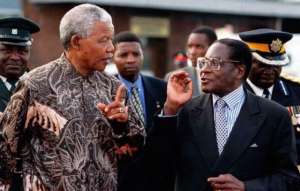 (GIN) – Thanks to the former South African leader, “Everything (today) is in the Whites’ hands.” That was the harsh judgement of the legacy of President Nelson Mandela heard this week at a rally in Zimbabwe. It provoked a media whirlwind that rocked southern Africa.

“The most important thing for (Mandela) was his release from prison and nothing else,” Zimbabwe’s President Robert Mugabe was widely reported to say. “He cherished that freedom more than anything else and forgot why he was put in jail.” Mugabe made his remarks in Shona at a ruling party rally in the central town of Gweru. They were translated by NewZimbabwe.com.

Mugabe claimed this view of Mandela was even shared by members of President Jacob Zuma’s cabinet.

“I was in South Africa recently talking to a minister in President Jacob Zuma’s office and I did ask him how they have handled the land issue after attaining independence. I did ask him why they left the whites with everything,” President Mugabe was quoted to say. “He answered my question in English and said: ‘Ask your friend Mandela.’”

Mandela had made “the biggest mistake” by failing to attend to land reform in South Africa, Mugabe declared, adding:  “They (whites) are in control of land, industries and companies and are now the employers of the blacks. These blacks have failed to liberate themselves from white supremacy all because of what Mandela did.”

The question of land ownership by whites has roiled both southern African countries where whites forcibly occupied good lands, dispossessing their Black African owners.  While Zimbabwe attempted a land reform program that gave land owned by whites to liberation war veterans and others, South Africa’s reform program was delayed for years.

Last March, faced with claims that 40,000 of the whites owned 80% of the land, President Jacob Zuma moved to expropriate white owned land without compensation.

“Land ownership is still deeply skewed along racial lines,” acknowledged Cherryl Walker, professor of sociology at the University of Stellenbosch and author of “Landmarked: Land Claims and Land Restitution in South Africa,” although she questioned the figures cited above.

Over the years, Mugabe and Mandela had a frosty relationship, with the South African liberation icon being very critical of the Zimbabwean leader’s human rights record.  Last week, South Africa announced it would give 200,000 Zimbabweans fresh work and residence permits for another four years so that they can continue eking out a living in that country.