A group in Italy is training migrants — mostly from sub-Saharan Africa — as beekeepers, then pairing them with honey producers who need employees. Aid groups say new efforts by European leaders to stem the flow of migrants from Africa ignores the fact that Europe needs these workers. According to Oxfam, Italy alone will need 1.6 million migrants over the next 10 years.

Back in his native Senegal, the only interaction Abdul Adan ever had with bees was when one stung his mouth while he was eating fresh honey. That day, his mouth was so swollen that he didn’t leave his home in Senegal’s Casamance region. Years later as a migrant worker in Alessandria, Italy, Adan is so comfortable with the insects that he does not even use gloves as he handles their hives and inspects their progress.

“I’m looking to see if the queen is here or not,” he said, as he uses his bare hands to look for the yellow dot that indicates the queen he placed in the hive a week before. “If there was the queen, she would have started laying eggs, but I don’t see any eggs.”

Adan is part of a project called Bee My Job, in which the Italian Cambalache Association trains migrants and refugees as beekeepers and finds work for them in Italy’s agribusiness industry. The association’s president, Mara Alacqua, says they have hosted and trained 107 people — mostly from Sub-Saharan Africa — since launching in 2014. 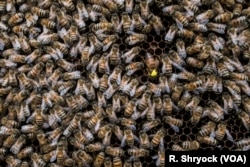 “Our beds are always full,” she said. “Every time a person leaves the project, and so we have a spare place, that place is covered straight away just within two days’ time.”

The migrants also take language classes as part of the program. Today, Adan is fluent in Italian and, despite his initial fears, he has become one of the most successful trainees.

“The first day that Mara asked me to do the work, I couldn’t sleep,” he said. “I said I have never done bee work, I was really scared that the bees would sting me and people would laugh and look at me, but afterward I figured and said I will learn, and maybe one day I can do it in my country.”

Nearly 95,000 migrants and refugees have arrived in Italy this year, though in the past two months, numbers have dropped by more than 50 percent compared to last year. Experts attribute the decrease to a more aggressive approach by the Libyan coast guard to turn boats back — and Libya’s increased support from the European Union. While in Libya, Adan says he was held hostage and tortured, and then forced into slave labor before escaping on a boat to Italy. 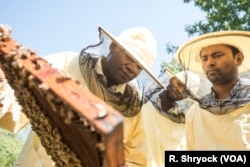 “To do work with bees, it’s not a work that is hard,” Adan said. “I already passed through stages that are harder than working with bees. If I tell you the Libyans who took us for work, you know how much we had to eat? One piece of bread a day. And we worked hard.”

A need for migrants

Amid ongoing efforts to stem the flow, Oxfam says European leaders are ignoring the need for migrants. According to the UK-based aid group, Italy alone will need an estimated 1.6 million workers over the next decade to sustain its welfare and pension plans.

Francesco Panella, a beekeeper for more than 40 years and president of Bee Life EU, agrees that migrant workers are good for Italy.

“In reality, we have a problem in our country,” he said. “On one side, there is a huge problem with unemployment; but the other issue, it’s not at all easy to find workers for agriculture. So, in reality, Italian agriculture is based on the work of foreigners. The world changes. It’s a world of movement, movement of people.” 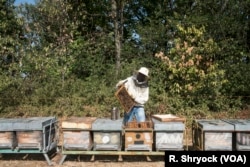 Ismael Soumarhoro works with bees in Tassarolo, Italy, Aug. 22, 2017. Soumahoro, originally from Guinea in West Africa, was trained in beekeeping by Italian NGO Bee My Job.

In a room filled with crates used to harvest honey, Panella is quick to philosophize about migration, human compassion and more. He adds that both his children are immigrants. One works in the U.S. and the other in the U.K., and his grandfather contemplated migrating to Argentina after World War II in search of opportunities. He said he keeps all these things in mind when employing migrant workers, such as Isamel Soumarhoro, from Guinea.

“What makes me happy is the moment when I take out the honey to take back to the house, because it’s a work that is a little difficult. You see, in 2015 when I arrived, there was more honey and the employees were happy,” Soumarhoro said.

According to Panella, one of the main threats to the program is the negative impact climate change and pesticides are having on honey production. Italy’s honey production this year is down 70 percent from normal harvests, he said. Most of the migrants hope the work continues, though they struggle being so far from home. 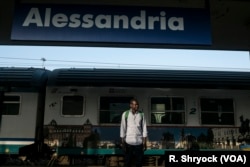 Every morning, Abdul Adan takes a 20-minute train ride to Alessandria, Italy, where he works with bee hives and in an organic garden to sell produce, Aug. 22, 2017. “I feel very lonely, very very,” he says.

“I feel very lonely, very very,” Adan said. “Sometimes when I think of my family, it makes me want to go back home, but that’s the story of immigration. I am looking for some means. Maybe one day I go back to my country, or one day I can bring my family. No one knows what the future holds.”

For the migrants, they hope the honey business can make tomorrow at least a bit sweeter.

RAILA ODINGA: THE CONFLICTING PERSONALITY OF AN ELECTION PETITION WINNER