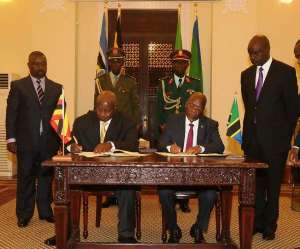 The drive to capitalize on landlocked Uganda’s new-found oil reserves entered a new phase recently when the presidents of Uganda and Tanzania ceremonially kicked off construction of a $3.55bn pipeline to carry the crude to port in Tanzania.

The 1,445-km-long pipe, set for completion by 2020, will stretch from Uganda’s western region where crude reserves were discovered in 2006 to Tanzania’s Indian Ocean seaport of Tanga.

It will be the longest electrically heated crude oil pipeline in the world, said Guy Maurice, Senior Vice President of Africa at Total Exploration and Production. Total is one of the owners of Ugandan oil fields, alongside China’s CNOOC and Tullow Oil of the UK. Tanzanian President John Magufuli and his Ugandan counterpart Yoweri Museveni urged the three joint venture partners to build the pipeline quickly, even before 2020.

From 2006 a series of oil discoveries put Uganda on the global energy map, and by 2014 its government was estimating that there were between 1.8 billion and 2.2 billion barrels of recoverable crude under Ugandan soil. The pipeline is critical for turning those reserves into hard currency, even more so after a long-running project to build a refinery in Uganda was hit by the departure of a Chinese contractor at the end of last month.

The government of Uganda said it picked Tanzania over its other neighbor Kenya as the route for the 24-inch pipe because Tanzania offered concessions. Tanzania agreed to waive taxes and offered to take up shares in the pipeline project. In return, it will charge a tariff of $12.2 per barrel.