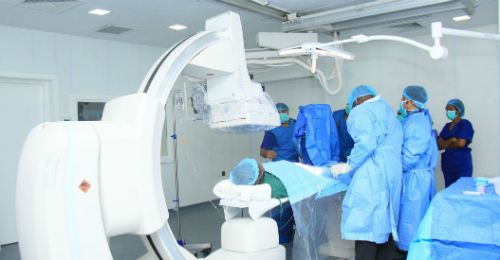 In the 2017 World Happiness Report by Gallup, African countries score poorly. Of the 150 countries on the list, the Central African Republic, Tanzania and Burundi rank as the unhappiest countries in the world.

Some of the factors driving unhappiness are the poor state of the continent’s health care systems, the persistence of HIV/AIDS, malaria and tuberculosis, and the growth of lifestyle diseases such as hypertension, heart disease and diabetes.

Few African countries make significant investments in the health sector—the median cost of health care in sub-Saharan Africa is $109 per person per year, according to Gallup. Some countries, such as the Democratic Republic of Congo (DRC), Madagascar and Niger, spend just half of that per person annually.

In 2010 only 23 countries were spending more than $44 per capita on health care, according to the World Health Organization. These countries got funding from several sources, including government, donors, employers, non-governmental organisations and households.

While many international organisations, such as UNICEF and the International Committee of the Red Cross, continue to support Africa’s health care system, private entities and individuals are also increasingly making contributions. For example, Africa’s richest person, Aliko Dangote, and the world’s second richest person, Bill Gates, have formed a partnership to address some of Africa’s key health needs.

In 2014 the Nigerian-born cement magnate made global headlines after donating $1.2 billion to Dangote Foundation, which used the money to buy equipment to donate to hospitals in Nigeria and set up mobile clinics in Côte d’Ivoire.

A philanthropist himself, Mr. Gates wrote of Mr. Dangote in Time magazine: “I know him best as a leader constantly in search of ways to bridge the gap between private business and health.”

The Bill & Melinda Gates Foundation focuses, among other projects, on strengthening Africa’s health care resources. According to the Gates Foundation, as of May 2013 it had earmarked $9 billion to fight diseases in Africa over 15 years. In 2016 the foundation pledged to give an additional $5 billion over a five-year period, two-thirds to be used to fight HIV/AIDS on the continent.

While acknowledging the Gates’ generosity, locals noted that for many years the Foundation had invested in the oil companies that have contributed in making health outcomes extremely poor in some areas of Nigeria. These companies include Eni, Royal Dutch Shell, ExxonMobil, Chevron and Total.

Facing a backlash, the Gates Foundation sold off some 87% of its investments in major coal, oil and gas companies, leaving approximately $200 million in these stocks as of 2016.  Groups such as Leave It in the Ground, a non-profit organization advocating for a global moratorium on fossil exploration, are pushing for divestment.

“The link between saving lives, a lower birth rate and ending poverty was the most important early lesson Melinda and I learned about global health,” said Mr. Gates recently. The Gates Foundation supports reducing childhood mortality by supplying hospitals with necessary equipment and hiring qualified local practitioners to take care of patients and their children.

In 2016, the Dangote Foundation and the Gates Foundation formed a philanthropic dream team when they announced a $100 million plan to fight malnutrition in Nigeria. The new scheme will fund programmes to 2020 and beyond, using local groups in the northwest and northeast Nigeria. The northeast has for the past seven years been ravaged by the Boko Haram’s Islamic militant insurgency, affecting all health care projects in the region.

The Foundations had already signed a deal to work together to foster immunization programmes in three northern states: Kaduna, Kano and Sokoto.

The Gates Foundation states on its website, “Contributions towards the costs of the program by the Bill & Melinda Gates Foundation, Dangote Foundation, and state governments will be staggered across three years: 30% in year one, 50% in year two, and 70% in year three, with the respective states taking progressive responsibility for financing immunization services.”

The future of about 44% of Nigeria’s 170 million people would be “greatly damaged if we don’t solve malnutrition,” said Mr. Gates, at a meeting with President Muhammadu Buhari.

Despite the many international and local efforts, cultural and religious factors often impede efforts to address Africa’s weak health infrastructure. For example, in 2007, religious leaders in northern Nigeria organized against aid workers administering polio vaccinations after rumours started circulating that the vaccines were adulterated and would cause infertility and HIV/AIDS.

In 2014, during the Ebola crisis, villagers chased and stoned Red Cross workers in Womey village in Guinea, accusing them of bringing “a strange disease”.

The big players may be Mr. Dangote and Mr. Gates, but others less well known are also making important contributions to Africa’s health care. After the 2014 Ebola outbreak in West Africa, for example, which resulted in the loss of about 11,300 lives, private companies in the three most affected countries—Guinea, Liberia and Sierra Leone—partnered with the government to fight the virus.

The Sierra Leone Brewery, for example, helped in constructing facilities for Ebola treatment. Individuals, such as Patrick Lansana, a Sierra Leonean communications expert, also volunteered their services for the Ebola fight. He said: “I joined the fight against Ebola because I wanted to help my country. My efforts, and those of others, made a difference. It would have been difficult for the government and international partners to combat the virus alone.”

Private and public sectors need to collaborate to help Africa’s health care system from collapse, notes a report by UK-based PricewaterHouseCoopers consultancy firm. The report states that public-private partnerships, or PPPs, when fully synergised can bring about quality health care. Under a PPP in the health sector, for example, a government can contribute by providing the health care infrastructure, while private entities can be involved in the operations.

In a widely published joint opinion piece last April, Mr. Dangote and Mr. Gates stated that improving health care in Africa depends on a “successful partnership between government, communities, religious and business leaders, volunteers, and NGOs. This ensures that everyone is rowing in the same direction.”