… as he affirm the anti- piracy guard of the police command 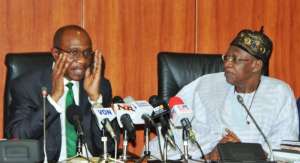 The Minister of Information and Culture, Alhaji Lai Mohammed (right), and the Governor of the Central Bank of Nigeria, Mr. Godwin Emefiele, when the Minister led stakeholders in the Creative Industry on a visit to the CBN Governor in Abuja on Tuesday.

The Minister of Information and Culture, Alhaji Lai Mohammed, has appealed to the Central Bank of Nigeria (CBN) to replicate in the Creative Industry the role it played in promoting the agriculture and health sectors.

The Minister made the appeal in Abuja on Tuesday when he led stakeholders in the Creative Industry to make a presentation to the CBN Governor, Mr. Godwin Emefiele, on the challenges and prospects of the Industry.
“I have watched over the years how the Central Bank has really been the catalyst in promoting agriculture, the health sector and the like and we believe that by the time we give you our short presentation, you will see why we have come here and we have made you our first stop to further enlist the support of the government to create that enabling environment,” he said.
Alhaji Mohammed stressed the need to change the perception about the Creative Industry as a mere entertainment instead of being a huge economic venture with the capacity to create wealth.
“We need to change the perception about the industry. When people hear the Creative Industry, they think about entertainment. Yes, it’s correct but it’s also very big business. It’s an economy which we have not exploited enough. It’s an economy which is probably more sustainable than our traditional economy. It’s an economy that has the potential to employ more people and create more wealth on a long term basis,” he said.
The Minister said as part of efforts to protect the revenue stream of the sector, the Ministry of Information and Culture, in collaboration with the stakeholders, has taken a giant step by kick starting a sustained fight against the piracy of intellectual property.
He said through the support of the Inspector General of Police, Anti-Piracy Units have been set up in all police commands and the Federal Capital Territory, adding that the recent raids carried out at Alaba market in furthering of the anti-piracy campaign led to the confiscation of pirated products worth millions of Naira.

The Minister of Information and Culture, Alhaji Lai Mohammed, and the Governor of the Central Bank of Nigeria, Mr. Godwin Emefiele, in a group photograph with stakeholders in the Creative Industry, during a visit to the CBN Governor in Abuja on Tuesday.

Alhaji Mohammed disclosed that an Industry Trust Fund will soon be set up to assist law enforcement agencies in the fight against piracy, and urged the the CBN Governor to support the Fund.

In his remarks, the CBN Governor said government has a responsibility to support the development of talents and creativity as a deliberate policy to create jobs.
He noted that the Service Sector, of which the Creative Industry is a part, contributes 54% of the country’s GDP, saying the Industry has a potential for growth, especially if a deliberate effort is made to protect talents and intellectual property
Mr. Emefiele said the huge potentials of the Creative industry will not be realized unless the issue of piracy is tackled decisively.
“What makes it easy for your business or your project to be bankable is when a bank sees the entire ramifications of your business, the entire chain and it sees that there are no probability of leakage in revenue, which you are supposed to be using to repay the bank loan. Piracy is a leakage,” he said.
Mr. Emefiele urged the stakeholders to form clusters and also work with the CBN’s Development Finance Department to make it easier for them to structure bankable proposals that will attract funding.
Earlier in their presentation, the stakeholders in the Creative Industry requested the CBN to float a N400 Billion Stimulus Capital Fund to support the growth and development of the industry.
0