(CNN)Kenya heads to the polls on August 8 with incumbent President Uhuru Kenyatta battling to secure a second five-year term.

But while many expect Kenyatta to prevail once again, his opponent and longtime rival opposition leader Raila Odinga remains hopeful.
Earlier in the campaign, the 55-year-old Kenyatta, who leads the Jubilee Alliance, had been expected to win easily — but that no longer looks certain.
Defeat would prove doubly embarrassing for Kenyatta, who would become the first Kenyan President not to have won reelection.
What’s the state of play?
With a week to go, all eyes are on the key candidates vying for the presidency — two men whose fathers led Kenya to independence nearly 55 years ago. While there are eight candidates in the election, only Kenyatta and Odinga retain any real hope of winning.
There is little love lost between the two men. Five years ago, Kenyatta defeated Odinga by a narrow margin, a result Odinga contested at the Supreme Courtafter allegations of electoral fraud — without success.
Fast-forward to the present and Odinga, who is chasing the presidency for the fourth time, has accused Kenyatta of attempting to rig the upcoming election.
Kenyatta, son of the country’s first president, Jomo Kenyatta, has in turn accused Odinga, son of the Kenya’s first vice president, of attempting to divide the country.
To win the election outright, either man must gain 50% of the votes, plus one — as well as at least 25% of the votes in half of Kenya’s 47 counties.
If no winner is declared, the election will go to a runoff, which would be a first in Kenya’s history.
What are the big talking points?
The election is largely being fought over the economy and the courting of the youth vote.
Kenyatta is promising to create 1.3 million new jobs, reduce the cost of living and create a more inclusive economy by reducing economic inequalities.
Odinga, 72, is promising to fight corruption, create jobs for young people and set up programs to improve food security.
Both men will need to do something to address Kenya’s troubling youth unemployment rate, which stands at 22.2%.
Approximately 80% of Kenya’s population is younger than 35, according to one report, while up to 51% of its 19.6 million registered voters are aged between 18 and 35.
Another factor likely to have an impact on people’s voting choices is the country’s severe drought, which has led to skyrocketing food prices and higher rates of inflation.
According to the United Nations Development Agency, 45.5% of Kenya’s population lives in poverty. 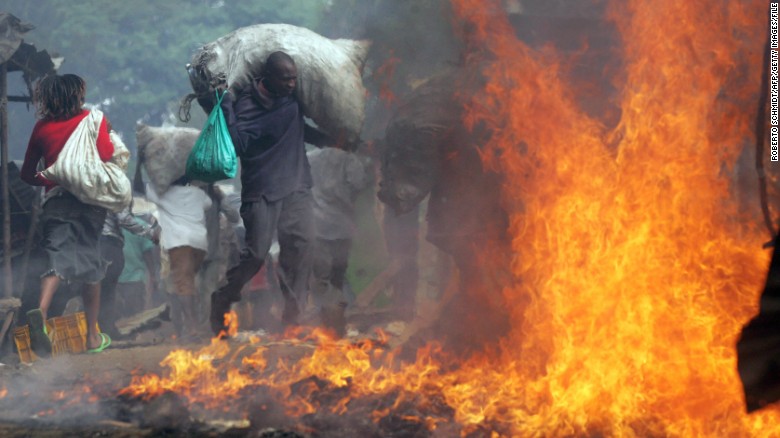 A resident of Kibera runs with a sack of charcoal he stole past a burning shack as he and thousands of other looters swept through the slum ransacking stores and setting cars and other property on fire 31 December 2007.
Kenya’s last election, in 2013, passed off peacefully, but 10 years ago the country was plunged into widespread violence in the aftermath of the 2007 vote.
More than 1,000 people were killed and 500,000 were displaced in months of bloodshed following the election, after Odinga — who had been defeated by the then-President Mwai Kibaki — claimed the vote had been rigged.
Opposing protesters loyal to each leader took to the streets, and protests escalated into bloody violence, fueled by decades of economic frustration and ethnic rivalry. The violence was not limited to supporters of the two political rivals — other ethnic groups joined in and picked sides, adding to the chaos.
Supporters battled it out using machetes and other crude weapons in the worst violence the nation had seen since it gained independence from Britain in 1963. Hundreds of thousands were displaced, with some still living as refugees in their own country years later.
After more than a month of negotiations, former United Nations Secretary-General Kofi Annan mediated a power-sharing agreement in February 2008 that was signed by both leaders. It created a prime minister’s office for Odinga as part of a power-sharing government.
In 2013, a breakdown in voter identification technology was the primary reason that Odinga contested the results of the vote, taking the case to Kenya’s highest court, which ultimately ruled in Kenyatta’s favor.
While there is a general expectation that the upcoming elections will be peaceful, tensions increased after a senior Kenyan election official was found dead just days before the country was due to go to the polls.
Before his death, Chris Msando, head of information at Kenya’s Integrated Electoral Management System, led the department responsible for voter identification and result-transmission technology for the election.

Kagame seems set to win again in Rwanda. But is he a ‘miracle man’ or a nascent dictator?

Does Boko Haram have the upper hand?