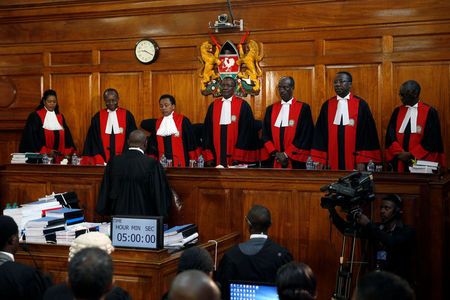 NAIROBI (Reuters) – Kenya’s Supreme Court on Monday ordered the election commission to allow the opposition, which is disputing the results of this month’s presidential poll, to have access to its computer servers and electronic devices used in the counting of votes.

Election authorities say President Uhuru Kenyatta won a second term in the Aug. 8 poll by 1.4 million votes. A parallel tally by independent monitors based on a sample of around 2,000 polling stations produced a similar result.

But opposition leader Raila Odinga’s coalition said in its court petition that results from more than a third of polling stations were flawed.

At least 28 people were killed in election-related violence, many of them shot by police after the results were announced, amid scattered protests in opposition strongholds.

The protests, which dissipated within days, had raised fears that major political violence could again destabilize Kenya – the region’s most developed economy – as it did following a disputed election in 2007.

The Supreme Court said it would allow Odinga’s National Super Alliance (NASA) and Kenyatta’s Jubilee Party limited access to the Independent Electoral and Boundaries Commission’s electronic devices to verify certain details, such as who had used the devices and accessed the servers.

COURT TO RULE BY FRIDAY

Last week, the election commission submitted two sets of tally sheets to the Supreme Court – those used at each of the 41,000 polling stations and those for each of the 292 constituencies.

James Orengo, the coalition’s lead lawyer, said some tally sheets at the constituency level had lacked certain security features and an official stamp.

“These forms and the security features were supposed to protect the integrity of the process,” he said.

But Paul Muite, an election commission lawyer, said that even if there were some administrative issues at constituency level, the vote totals on those forms would be supported by a detailed analysis of the tally sheets from the polling stations.

“It is next to impossible to rig the elections at the polling station level,” he said.

The system was designed as a manual backup to verify electronic results. In the 2013 Kenyan election, electronic systems failed widely.

The election commission has been criticized by Kenyan civil society groups for being slow to post copies of the paper forms online.

More than a week after the official results were announced, thousands of scans of the forms verifying the result were still missing from its website.

The court must rule by Sept. 1. If it decides in favor of the opposition, a new presidential election must be held within 60 days.

Proceedings will resume on Tuesday at 0800 GMT, when Kenyatta’s legal team will address the court.

Odinga also ran for the presidency in 2007 and 2013, losing both times and blaming fraud. He went to court to challenge the 2013 election result – a decision that helped quell a repeat of violence then.