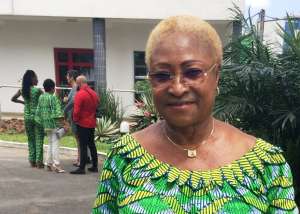 With stark inequalities in school, as well as in access to healthcare and jobs, the United Nations ranks French-speaking West Africa’s largest economy 155 out of 159 countries when it comes to gender equity.

“Ivorian women get by because we have strength,” said Animata Touré, before trying to cajole passersby into buying her fruit in the city’s business district Plateau.

“(Life) is a bit hard,” she acknowledged.

The 46-year-old has scraped by as a hawker all her life, shelving her dream of opening a small restaurant as unrealistic.

“Who is going to give me the means to do that?”

Ivorian women earn on average half as much as men, the World Bank says, largely because they are less educated, spend several hours a day cooking and caring for children, and lack access to finance, equipment and commercial networks.

Supporting would-be female entrepreneurs, like Touré, could generate at least $6 billion, or a third of the country’s current revenues, the Bank says.

“We have huge potential here,” said Ahmed Diomande, an official in the trade ministry, describing the World Bank’s latest data as an “alarm bell”.

“The challenge is convincing men that they have a vested interest in gender parity,” he told the Thomson Reuters Foundation at a women’s rights conference in Abidjan.

The government is working to reduce the gender gap by using a $9 million loan from Morocco to fund small- and medium-sized businesses run by women entrepreneurs, he said.

It is also backing a private-sector initiative to lift women out of the informal sector by training them as grocery store managers in more than a dozen shops in Abidjan.

As Ivory Coast’s vast, informal economy is largely run by women, authorities and business leaders are keen to help them make the leap to better-paying, regulated businesses with training and access to credit.

“Economic power is in women’s hands,” said Salimata Porquet, a former politician who fought successfully for gender equality at work to be included in Ivory Coast’s 2016 constitution.

Ivory Coast needs to get more girls into school and provide them with role models across the board, from business to politics, activists say, as reducing gender inequality has proven key to the success of many emerging nations.

Discrimination starts young in Ivory Coast, where only 33 percent of women are literate compared to 53 percent of men – a gap that has widened since the early 1980s, the bank says.

Unlike most African nations, Ivory Coast does not have an equal number of boys and girls in primary school.

Many poor parents educate their boys, rather than girls, as they believe the sons will get better jobs and provide for them. Girls, meanwhile, often become married mothers in their teens.

“The more we see women… in a field that we like, the more we have young girls trying to follow that path,” said Tchonté Silué, 23, a female blogger who runs a children’s library in Abidjan to encourage youngsters to read.

She tries to inspire Ivorian girls by sharing her story as a young woman who earned a master’s degree in the United States.

Activists say women also need to support each other as they advance in business and politics.

“If we’re able to share our experiences, that can inspire each woman to do her part,” said Marie-Thérèse Boua N’Guessan, who runs a publication about women’s leadership.