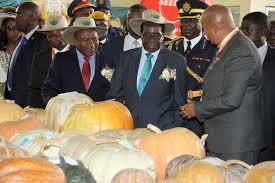 The Zimbabwe Agricultural Show Society (ZAS) has revealed that
this year it will be using latest technology including drones to
ensure public safety, according to Mr Anxious Masuka, ZAS, CEO.
Masuka said that security issues are at the core of visitor
convinience.

He added that children will also be tagged with the
support of ZAS partners to ensure their safety.Also it is reported
that a vibrant and interactive website, a mobile app and many social
media updates will be available for show goers and exhibitors this
year.

In 2011 a child was abducted at the Harare Agricultural Show and his
remains were later found within the vicinity of the show grounds.
Over 250 000 visitors are expected to grace the event with plans in
the pipeline to boost attendance to at least 500 000 visitors annually
in the next few years.