The days of the French colonial empire may be long gone, but Paris’ involvement in the unstable region of the Sahel is not. French forces have been offering support for countries in the region — notably Group of 5 (G5) members Burkina Faso, Mali, Chad, Niger and Mauritania — for years. But as French concerns about the overmilitarization of the Sahel have grown, Paris seeks to find another solution in the form of the G5 Sahel Force. Made up of African troops from the G5 states, this counterterrorism and counter-trafficking entity may eventually play a critical role in stabilizing the Sahel region.

As recently as Aug. 2, French Minister of the Armed Forces Florence Parly visited the Sahel states of Chad, Niger and Mali to engage with soldiers and speak with leaders. The subtext for Parly’s trip was a desire to reaffirm French support for the Sahel Force. France and its allies are hoping that the entity will one day offer regional security using local forces, enabling Paris and other Western nations to lessen their involvement in the Sahel.

Africa’s Sahel region is most commonly associated with a handful of countries stretching across the sub-Saharan portion of the continent, including the G5. These nations are prone to several forms of state weakness, including a lack of resources and investment, poverty, corrupt and ineffectual armed forces and an inability to assert control over vast territories. Thus, the region has historically been a hotbed for terrorism, political instability and the trafficking of arms, drugs and humans. As a result, Western nations — particularly France, a former Sahel colonizer — have often stepped in to help stabilize the area. The French military, for example, has been conducting counterterrorism operations there under the auspices of Operation Barkhane since 2013, when Paris intervened to prevent Mali’s collapse amid an assault from Tuareg and Islamic militant forces.

France has been fairly successful as the region’s security guarantor, pulling its diplomatic and security weight to aid Mali and shore up other relatively weak regional allies such as Niger. But recently, Paris has sought to lessen its defense burden in the Sahel by increasingly offloading onto African and European allies. (The U.S., for its part, is already involved in the region, engaging in special operations, drone operations and logistical support.) All European states are ultimately threatened by the problems of the Sahel, given that its relative proximity to the Mediterranean Sea provides a thin barrier for transnational issues. It is therefore understandable that France would expect these nations — especially Germany — to increase their contributions.

One key component of this redistribution of resources has been the European Union Training Mission in Mali (EUTM), designed to advise and train the Malian military. As noted, Mali has been at the epicenter of the region’s terrorism problem, and since 2013, the EUTM has been critical in building up the Malian armed forces following a coup and decades of corruption. Training missions such as the EUTM have been particularly useful in encouraging involvement from European countries — including Germany — that are more reticent about exercising hard power overseas.

The EUTM mission and Operation Barkhane are successes in many respects. But the overall picture of Sahel security in the coming years is one that will heavily feature French forces, simply because of the limited capacity of regional governments and militaries. From Mauritania to Niger, countries on the continent continue to struggle with border security: On July 12, the Mauritanian minister of defense declared the country’s border with Algeria closed and its immediate area a military zone, with the Mauritanian armed forces considering all individuals in the zone to be legitimate targets. The decision was no doubt the result of increased drug trafficking and terrorist group operations in the area.

And the degradation of the security environment in recent months and years is not exclusive to Mauritania’s remote north. Other zones, such as the tri-border region between Mali, Burkina Faso and Niger, have seen increases in terrorist activity: militants have attacked wayward government outposts to steal provisions, wreak havoc on locals and sometimes kidnap the few Westerners left in the vast space. Thus, the local authorities of formerly stable zones are now under additional pressure to address the metastasizing threat.
An African Solution

The reality is that France cannot significantly reduce its security burdens in the Sahel right now. The former colonial power has instead been attempting to broaden the scope of its strategy. French President Emmanuel Macron has expressed concern about France’s strategy in the region becoming overly militarized in recent years, to the detriment of longer-term state building. Since May 2017, Macron’s administration has accelerated efforts to get the G5 Sahel Force up and running. Designed to tackle the more transnational nature of terrorism and crime, the standing force has been touted as “An African solution for African problems” (a term no doubt used to drum up international support). But as with everything in the instability-plagued region, the launch of the G5 Sahel Force has been marked by almost equal parts success and setbacks.

There are countless examples of African forces struggling to make progress without being totally dependent on the financial and logistical support of the United Nations, the European Union and other global powers. For instance, the standby forces of the Economic Community of West African States and the Economic Community of Central African States both faced serious difficulties in their efforts to become productive and autonomous. The G5 Sahel Force is almost certainly headed in the same direction. 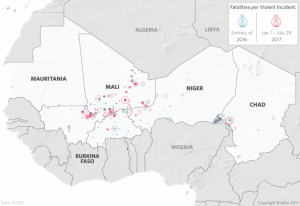 On June 5, the European Union committed $56 million to the force following a visit to Mali by EU foreign policy chief Federica Mogherini. France has also ponied up, reportedly providing an initial $9 million along with 70 tactical vehicles, in addition to $228 million in regional development aid over the next five years. As Macron put it, France’s real contribution will be “advice, material and combat.” Moreover, Berlin is expected to host an international donors conference in September to partially fund the G5 Sahel Force.

In spite of these initial and prospective gains, the financial viability of the force is still in question. Reportedly, each G5 Sahel member state will contribute $10 million each, bringing in another $50 million. But Malian President Ibrahim Boubacar Keita recently noted that current levels of funding were nowhere near the estimated $500 million annual budget that he sees as necessary to fund the 5,000-member force.

A “two steps forward, one step back” dynamic was further on display at the United Nations on June 21, when the U.N. Security Council unanimously passed a resolution that backed the Sahel Force. U.S. objections to additional U.N. spending obligations forced France to water down the resolution’s text. (The Trump administration has sought to cut its international commitments, including in the realm of peacekeeping.) The version of the resolution that ultimately passed states only that the U.N. Security Council “welcomes the deployment” of the force; it does not commit the international organization to any funding.

Putting the Sahel Force Into Action

Nevertheless, Macron is pushing hard to have the G5 Sahel Force up and running by October, so that it can “prove itself” on the ground. Some facts about the entity have already been revealed: For example, it will be headquartered in Sevare in northern Mali and will reportedly focus on three critical border regions: the West Zone (Mali-Mauritania), the Center Zone (Mali-Burkina Faso-Niger), and the East Zone (Niger-Chad). This follows the emphasis on cross-border security challenges implemented by the Multinational Joint Task Force, which was designed to address the threat posed by the Boko Haram insurgency. And in a broader sense, the regional focus continues a trend of Sahel states pooling their resources. In one such recent instance, Mali, Chad and Niger signed an agreement in May allowing the three countries to expedite potential terrorist or criminal suspects, exchange judicial records and obtain information about travelers.

However, the exact number and composition of the Sahel Force remain uncertain. It will reportedly be composed of battalions of 750 soldiers from each country, although this would tally up to a 3,750-member force, well short of the oft-cited 5,000-member figure. Moreover, it has been stated that these soldiers will operate under their own respective flags rather than being part of a supranational group. This could prove problematic if political leaders become unwilling to spread various burdens across the broader force. Chadian President Idriss Deby recently complained that his country’s armed forces — a key French ally and the region’s most capable military — are “overstretched” in their struggle to combat terrorism. The G5 request for more troop contributions comes amid Chad’s continued financial difficulties in the wake of falling crude oil exports prices. Deby is likely hoping to drum up more financial support from Western allies, namely France.

Overall, it remains to be seen how much interoperability can truly be achieved by the five nation, seven battalion Sahel Force — and how heavily the entity will rely on France. There have been joint African military operations in the past, such as Mali and Burkina Faso’s Operation Panga, which focused on rooting out militants in the Fhero Forest. But while that operation was hailed as a success because militants were killed and captured, materiel was seized and intelligence was gained, it relied heavily on the French military as its backbone. France’s Operation Barkhane furnished soldiers, tactical vehicles, fighter jets and drones.

One thing is clear: Along with limited help from other international actors, the French military is instrumental in holding the Sahel region together. Getting the G5 Sahel Force up and running is a big step forward in finding regional solutions for regional problems. But even in the best case scenario, France is still many years away from being able to significantly reduce its security burden in the Sahel. 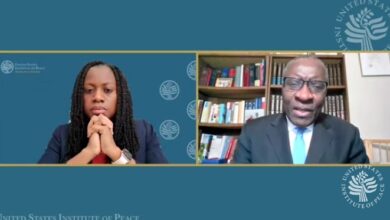