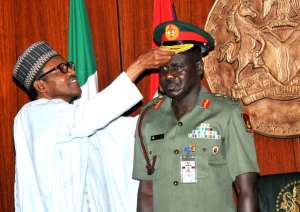 File Picture.President Muhammadu Buhari Decorating The Chief Of Army Staff, Maj.-Gen. Tukur Buratai With His New Rank Cap Of Lt.-Gen, At The Presidential Villa In Abuja On Thursday (13/8/15) | NAN

History tells a story in time past, but first, shapes the story in time present. But it never lies. It truthfully romances men and women of exceptional endowments and preserves them to inspire today’s generation. It provides today’s stamina for the anointed to excel and exceed the accomplishments of yesterday’s historical heroes. 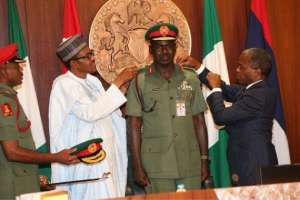 These are no doubt a wide range of qualities and virtues, quite difficult to find in sufficient measures in a single leader. But Gen. Buratai exhilaratingly epitomizes all of them, which unconsciously stands him out tall among equals.
But briefly, Gen. Buratai’s timeline as leader of the counter-insurgency campaigns in Nigeria exposes that he promised to substantially decimate Boko Haram insurgents by December 2015, after he assumed office in July of the same year. He wasted no time in setting the machinery in motion.
The Army Chief met troops whose morale in the battlefield was dampened by poor or lack of arms and ammunitions to battle insurgency; a condition further worsened by poor welfare packages of troops in the battlefront; arrears of unpaid salaries and allowances of army personnel and zero initiative on incentives to fighting troops. He toured Army formations and heard from the horses mouth and instantly corrected the wrongs to stabilize the psyche of troops.
A man of his words, as Gen. Buratai promised, by December 2015, Nigerian troops had decimated Boko Haram terrorists and by early 2016, Buratai’s troops had reclaimed the 16 local government areas in the Northeast annexed by terrorists and returned them to Nigeria. By mid-2016, insurgents had been pushed back incredibly and confined to few areas of sporadic bomb attacks in the Northeast, a feat acknowledged by former US President  Barack Obama and later, the United Nations (UN) former Secretary General, Mr. Ban Ki-moon.
The victory streaks against insurgents intensified as in December 2016, Gen. Buratai pleasantly astounded Nigerians with an unexpected New Year gift; the Nigerian troops demystification and   invasion of the dreaded Sambisa forest to Camp Zero.
Sambisa forest is reputed as terrorists’ most secured fortress of recuperation and plotting venue for atrocities on Nigeria. The feat marked the defeat of Boko Haram terrorism in Nigeria, as IDPs returned to deserted homes and life in the Northeast advertised incredible normalcy. And with restoration of respite and peace, the rebuilding process in the Northeast is also progressing steadily.
Beyond it, the Nigerian troops led by Gen. Buratai have being instrumental to the voluntary surrender of Boko Haram top commanders and thousands of adherents who have renounced terrorism, de-radicalised and re-integrated into the society as sane beings. Actions of troops in the last two years served as springboard for the rescue of over 20, 000 persons abducted by Boko Haram insurgents, including the released Chibok schoolgirls.
Gen. Buratal is in the last phase, by leading the battle for the final termination of Boko Haram terrorism in Nigeria, as he has issued a directive for the capture of Boko Haram sect’s factional leader Abubakar Shekau “dead or live; Himself and other colleagues have relocated to Maiduguri in compliance with Presidential directive to end the recurrent suicide bomb attacks on soft targets in the region; a mission that has started yielding fruitful results.
His transparent and accountable leadership of the Nigerian Army has earned him uncontested loyalty from Army officers and personnel, which has fostered unity of purpose, mutual interactions with the civil populace, respect for human rights, patriotism and the passion of love for their country, Nigeria, as evident in the sacrifices to free Nigeria from terrorism.
Suffice it to say, President Buhari is a blessed leader and father of modern Nigeria, privileged to see the crop of decent and disciplined officers and soldiers that God gave him the foresight to nurture with the appointment of Gen. Buratai as Nigerian Army’s helmsman. Congratulations, Gen. Buartai, “The Peoples General” for adding another feather to your cap with this well-deserved award.
*Ayodeji, a columnist at THE NIGERIAN writes from 199 Watford Way, London, United Kingdom.
0