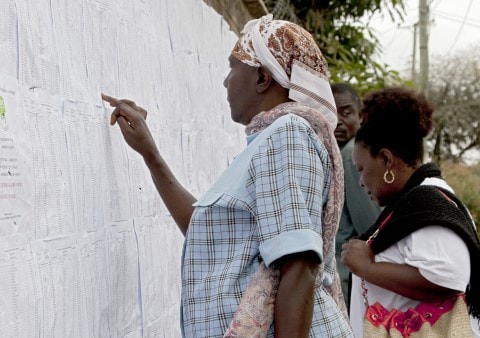 Kenyans check names on the electoral lists at a polling station in the Nairobi South C, in Nairobi, Kenya, Monday Aug. 7, 2017. Kenyans are due to go to the polls on Aug. 8, to vote in presidential elections after a tightly-fought race between President Uhuru Kenyatta and main opposition leader Raila Odinga. ( (Sayyid Abdul Azim/Associated Press)

KAMPALA, Uganda — Kenyans vote Tuesday in a close presidential election between President Uhuru Kenyatta, who seeks a second term, and Raila Odinga, who lost the last two contests. The East African high-tech and commercial hub of 44 million people is often described as one of the continent’s most politically stable countries, but the torture and killing of a top election official has many recalling the disputed 2007 election between the same candidates that left more than 1,000 people dead.

A look at the issues around the vote:

Kenyatta and Odinga are from storied political families. Kenyatta is the son of Jomo Kenyatta, Kenya’s first president, and Odinga is the son of Jaramogi Odinga Odinga, the country’s first vice president. In Tuesday’s balloting, which includes other minor candidates, one must win more than 50 percent of the vote to avoid a runoff election.

After losing the past two elections, this could be the last chance for the 72-year-old Raila Odinga to claim the seat that eluded his father. Odinga says he wants to restore a strong government, stamp out corruption and improve the lives of the poorest Kenyans.

The 55-year-old Kenyatta wants to avoid becoming the first Kenyan president not to win re-election. He won in 2013 with 50.03 percent of the vote, triggering an unsuccessful legal challenge by Odinga. Kenyatta at the time faced criminal charges at the International Criminal Court over his alleged role in the 2007 election violence. Those charges were dropped due to lack of evidence, with the ICC prosecutor blaming unprecedented witness interference and bribery.

This time, Kenyatta has appeared more confident while campaigning, pointing to major infrastructure projects, many backed by China, and claiming strong economic growth.

THE CALL OF TRIBE

Most political organizing in Kenya is tied to ethnicity. Many voters see Kenyatta as the candidate of the Kikuyu people, the country’s largest ethnic group, and Odinga representing the Luo. That the Luo have never produced a head of state adds drama to the election.

“Many middle-class Kenyans will, in an instant, go from speaking of globalization and borderless innovation while sipping on their cafe macchiatos to offering blind support to a well-known thug who happens to be from their tribes,” journalist Daniel Kalinaki wrote in a recent column for the Daily Monitor newspaper.

Kenyatta’s running mate under the Jubilee coalition, Deputy President William Ruto, is expected to marshal the votes of his Kalenjin people. Odinga leads the National Super Alliance, which includes political leaders of the Kamba and Luhya ethnic groups.

But Kenya’s political landscape is noted for shifting alliances. Kenyatta’s running mate Ruto was an ally of Odinga in 2007. Ruto is now being challenged at home by an influential governor who supports Odinga, which could split the Kalenjin vote that was crucial in Kenyatta’s 2013 win.

Severe drought conditions in half of Kenya’s 47 counties have worsened tensions over land as farmers face invasions from semi-nomadic herders seeking room to graze their cattle. In Laikipia county, more than 30 people have died. Some farmers say politicians have incited the herders with the aim of shifting demographics in their favor and winning elections.

Despite Kenya’s expanding middle class and economic growth of 5.6 percent in 2016, according to national figures, poverty remains widespread. More than 40 percent of people live on less than $2 a day. Official corruption also feeds tensions.

The al-Shabab extremist group, based in neighboring Somalia, already has threatened Kenya’s elections with a series of deadly attacks in border areas. That strains Kenya’s security forces as they seek to keep the vote free of violence.

The torture and killing in late July of Christopher Msando, an official in charge of Kenya’s electronic voting system, has fueled concerns that the balloting could be rigged. The biometric system malfunctioned in the 2013 election, leading to opposition claims of vote-tampering.

As election observers, including former U.S. Secretary of State John Kerry, prepare for the vote, Kenyan officials have said it is “unlikely” they will shut down the internet — but they might shut down some social media if “necessary” to calm hate speech and incitement.

Despite the concerns, the International Crisis Group has said Kenya is better prepared to handle any violence. “There have been major efforts by security forces, civil society and the business community to try to forestall a crisis,” its assessment says. “In short, unless there is large-scale failure of electoral equipment on election day or if the defeated candidate refuses to concede, a crisis on the scale of what happened in 2007 is unlikely.”