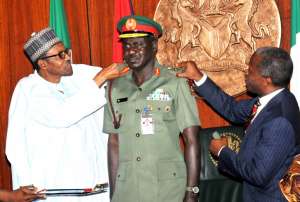 President Muhammadu Buhari (L) Aided By Vice-President Yemi
Osinbajo In Decorating The Chief Of Army Staff, Maj.-Gen. Tukur Buratai
With His New Rank Of Lt.-Gen, At The Presidential Villa Abuja On
Thursday (13/8/15) | NAN

If I had a chance in my youthful days, I would have enlisted into one arm of the Nigerian Armed Forces.  But I was frustrated, as several attempts I made for admission into the Nigerian Defence Academy (NDA) Kaduna were met with a brick wall. After the third failed attempt, I resigned to fate and gave up pursuing a career in the military.