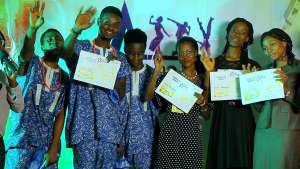 The search for God given talents continued as 4 contestants from the Lagos region advanced to semi-finals of Faces of God Talents (FGT) Season 1. The talents were selected after thrilling performances by contestants who had earlier emerged from preliminary auditions.
The contestants delivered a colorful and spectacular display of distinct talents in singing, dancing and drama which got the audience present asking for more.
At the end of the day, those that received the judges nod to advance to the semifinal of the talent show slated for Abuja are as follows ; Afinni Precious, Onafuye Oluwakemi, Afolabi Olasubomi and Aroye Jesu (a music and dance group)
These four contestants will compete with the following 9 other semi-finalists who made the cut earlier in Ibadan; Raji Adeola, Emmanuel Joshua, Ibirinde Adetola Mary, Gospel Flow, Amadiegwu Augustine, Olufikayo Abioye, Adejunwo Olamide, Glorious Vision Dance Drama Ministry, as well as Kiddies dance sensations,  The Chrysolite Crew.
FGT semi-finals will feature other acts to be picked later from Port Harcourt and Abuja zones for a chance to advance one step closer to the grand finale and stand the chance to win the STAR PRIZE of a car, album recording deal and other empowerment prizes.
FACES of GOD TALENTS(FGT) is a unique youth gospel talent competition and an initiative by an NGO- The Faces of God foundation, in partnership with The Redeemed Christian Church of God (RCCG) Elshaddai Parish, Gwarinpa, Abuja; Nigeria.
The FGT Foundation that is focused on identifying, nurturing and celebrating talents in children and young adults from age 10 to 40 years.

COVID-19 and African Economies: Entrepreneurship should be encouraged – Charles Boamah

The latest on Covid-19 stimulus, and why Spotify spent big on Joe Rogan: CNBC After Hours