CAIRO (AP) — Sudan on Wednesday announced it was freezing negotiations with the United States in retaliation for the Trump administration’s move to postpone permanently lifting U.S. sanctions on the African country.

Earlier, Washington said it wanted more time to determine whether the government of President Omar al-Bashir had made enough progress after decades of isolation, war and abuses.

Following the U.S. announcement, al-Bashir decided “to suspend the work of the negotiating committee with the U.S. until Oct. 12,” according to a brief announcement carried by the official SUNA news agency. Al-Bashir and his government had previously said they met all requirements and expected sanctions to be lifted, although activists and opposition disagreed.

Sudanese Foreign Minister Ibrahim Ghandour said on Tuesday that he saw the easing of the sanctions as “a right” and that Sudan would reject any other decision.

Just before leaving office in January, former President Barack Obama issued an executive order lifting decades-old Sudan sanctions on a probationary basis. Temporary sanctions relief took effect immediately, and was to become permanent on Wednesday unless the Trump administration acted to stop it.

President Donald Trump, in a new executive order issued later Tuesday, moved that deadline back by three months, while keeping the temporary sanctions relief in place in the meantime.

That now means that the Sudan sanctions will permanently expire on Oct. 13, unless the administration acts to snap them back into place.

The Obama administration justified lifting the sanctions by citing improved counterterrorism efforts and other progress in Sudan. But human rights activists and opposition have said the sanctions should stay in place.

“Today, victims, human rights defenders, displaced persons and those who are denied their right to humanitarian access among others will receive with joy President Trump’s decision,” Yasir Arman, secretary general of rebel group SPLM-N said in a statement.

“It is our conviction that lifting sanctions on Sudan should be organically linked to a program of realizing a just peace and democratic transformation in Sudan,” Arman added.

Several dozen U.S. lawmakers had urged Trump to delay a final decision by a full year, arguing that the new U.S. administration does not yet have sufficient staff in place to fully evaluate whether the sanctions merited being removed.

State Department spokeswoman Heather Nauert credited Sudan with making progress in improving humanitarian access, cooperating with the U.S. on counter-terrorism and preserving a cease-fire in conflict areas. But she said the administration needed more time to review the situation and determine whether it was appropriate to lift the sanctions.

“We remain deeply committed to engagement with the GOS and working toward further progress,” Nauert said, using an acronym for the Government of Sudan.

Sudan has been under U.S. financial sanctions since the 1990s, when it was briefly home to Osama Bin Laden and accused of sponsoring terrorism.

Rights advocates and opposition groups have said lifting the sanctions would strengthen al-Bashir, who is wanted by the Netherlands-based International Criminal Court for genocide charges linked to the Darfur conflict, and that lifting the measures would help bring his government back into the international fold, despite its past abuses.

“We think the decision to postpone makes a lot of sense, given the situation on the ground,” said Jehanne Henry of New York-based Human Rights Watch. “We also urge the U.S. government to assess Sudan’s performance on human rights issues using more specific benchmarks than were included in Obama’s executive order.”

The U.S. has worked to isolate Sudan since the military coup that brought al-Bashir to power in 1989, and even if Trump lets the sanctions expire in October, other sanctions targeting the Sudanese leader and some of his inner circle will remain in place regardless.

A senior Trump administration official declined to comment on the Sudan president’s reaction, other than to say that the U.S. was still holding “senior-level engagements” on Wednesday with Sudan’s government and planned to keep doing so going forward.

The official wasn’t authorized to be identified by name and briefed reporters on condition of anonymity.

In Washington, the Treasury Department released updated guidance Wednesday, explaining that all transactions that were barred under the sanctions but have been permitted since Obama’s move in January will remain permitted. Other, specific sanctions that were never suspended — such as those related to Darfur — remain in place.

Nigeria: Why I Titled My Song Fela Kuti - Wyclef Jean 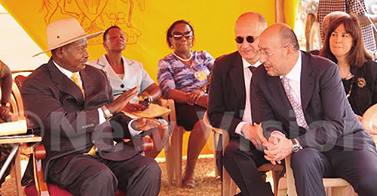