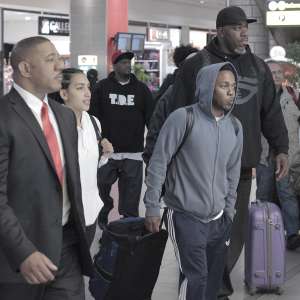 Their conversation finds them touching on the few things they have in common, including their love of hip-hop, and being black and famous. They also bonded over the experience of visiting Africa, with Lamar specifically pointing to his visit to South Africa as his “I made it” moment.

The rapper talks about how going to South Africa was an illuminating experience;

“I went to South Africa – Durban, Cape Town, Johannesburg – and those were definitely the ‘I’ve arrived’ shows,” Lamar said. “Outside of the money, the success, the accolades… This is a place that we, in urban communities, never dream of. We never dream of Africa. Like, ‘Damn, this is the motherland.’ You feel it as soon as you touch down. That moment changed my whole perspective on how to convey my art.’

The award-winning singer performed in South Africa in 2014. He pointed that the visit had a huge influence on his career.
Kendrick Lamar has received a number of accolades over the course of his career, including seven Grammy Awards. The rapper appeared for the first time on the Time 100 list of most influential people in 2016. His latest album, Damn, was certified platinum by the Recording Industry Association of America.

Lamar kicked off his DAMN tour on July 12, but he is not touring any African countries – yet.

You can read the full interview here…

South Africa: Lies Were Used to Oust Me - Mbeki