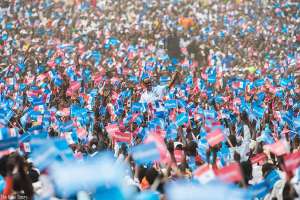 Election campaigns kicked off across the country yesterday with the three candidates in this year’s presidential race addressing different rallies to woo voters.

Incumbent President Paul Kagame of the Rwanda Patriotic Front (RPF) launched his campaign in the Southern Province’s district of Ruhango, before addressing another rally in Nyanza.

On Kagame’s way, thousands of supporters lined the streets from the city centre to the busy commercial centre of Nyabugogo, hoping tocatch a glimpse of their favourite candidate.

The mood turned celebratory and cheers and ululations filled the streets as his convoy snaked through the streets to make his way to the area where he was born some 59 years ago.

“It was a busy morning on the streets but it all of a sudden changed. Normally, Fridays here are too busy but it feels like a Sunday,” he said.

RPF flags and other campaign materials and party colours dominated many public spaces including all the major roundabouts around Kigali.

Also, several cars with RPF stickers could be seen.

Away from the city centre, it was slightly colourful day on the streets of Remera.

At the Rwanda Biomedical Centre (RBC) junction, three large pots colorfully branded with RPF-Inkotanyi colors are connected by the party’s flag, forming a triangle in the middle of the road creating a much needed roundabout.

In a phone interview with Saturday Times, Habineza cheerfully said that his first day had been a success.

“It was a huge success. The turnout was good and we expect it to be even better tomorrow [today]. The Sector, District and Police authorities were all present and even when some people tried to discourage our supporters from coming for the rally, they stepped in and intervened. Overall, everything went well,” he said.

Today, Habineza heads to Nyamasheke District, Kagame goes to Nyaruguru and Gisagara, while Mpayimana will be campaigning in Muhanga and Nyanza districts.

The Executive Secretary of the National Electoral Commission, Charles Munyaneza, told Saturday Times that generally reports from the field from NEC representatives were positive.

“Residents showed up and, overall, the process was peaceful. Of course, at the beginning there are some small negligible hiccups like time keeping and we are hoping that tomorrow [today] and other days that follow will be much better,” he said.

In a Tweet, the Ministry of Local Government said yesterday’s presidential campaigns kicked off across the country smoothly.

“We wish Rwandans peaceful campaigns and smooth preparations for elections. All the rallies today were peaceful,” It said.

Theos Badege, the Police Spokesman, also said it was a perfect day in terms of security.

“Whether it was at the campaign venue or road safety, everything went well especially because of the cooperation between different stakeholders such as local authorities.

“People complied with our call. We encourage them to keep the tranquil and to respect the law and to make sure that vehicles are not overloaded, have insurance, and maintain the required speed on the roads.”- Marie-Jose Mukarwego 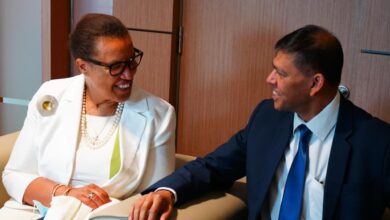