The name Maitama Sule will no doubt continue to ring bells in the minds of many Nigerians years after the death of the nation’s former permanent representative to the United Nations.

A strong advocate of Nigeria’s unity, he was known to always speak his mind on prevalent national issues and was one of the prominent voices of the northern region.

He lamented that allocating oil wells to private individuals marked the beginning of corruption in government as it had also led the nation to “a life of embezzlement and squandering of state resources.”

CALLED FOR A BAN OF PUBLIC OFFICIALS CONVICTED FOR CORRUPTION 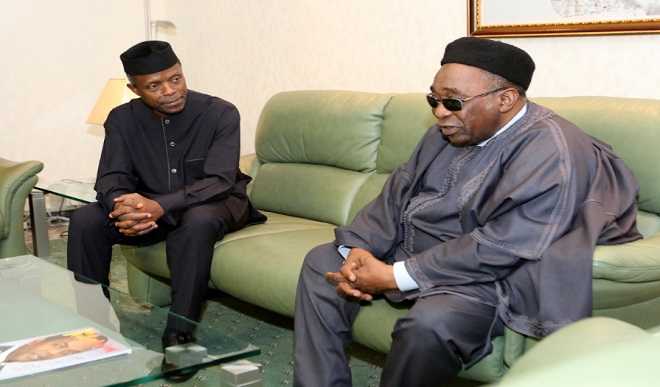 During a visit to Acting President Yemi Osinbajo

In September 2016, the former mInister of national guidance had urged the government to bring in place a ban that will prevent public officers that have been convicted of corruption and looting public funds from participating in partisan politics and holding public office.

He said the ban should be backed by a law passed by the national assembly so as to be effective.

“This (the ban) will be possible when there is a law to back it and we hope the law will be enacted soon to support the idea,” he was quoted to have said.

LIVED IN A MUD HOUSE

For someone who held a top position in government, one would expect his lifestyle to be that of utmost comfort. But such was never the case, as Sule had claimed.

He had told a group of journalists during an interview that he never had the money to build his own house as a serving minister – just like his colleagues “were building theirs.”

He had said that while serving as the then minister, he was given a piece of land in Ikoyi, Lagos, like all other ministers, but while his colleagues developed theirs, “I could not develop mine. All around me, the plots were developed.”

“I, therefore, did not have a house in Lagos. I didn’t bother to get one in Kaduna and still I am not interested in getting one in Abuja, because I haven’t got the means. Even in Kano after the coup, I had no house, except the mud house, where I was born and lived with my father. That was the house I went back to after almost seven years living in a palace in Lagos.

“From the palace house in Lagos, I went back to my mud house in Kano and started racing with rats and mice again (general laughter). But the interesting thing is this: when I was sending my family home after the coup, I had no money, I had to borrow money from my permanent secretary and a friend in Lagos. I had to hire a lorry to carry my goods to Kano. I had no bank account then, no bank account anywhere in the world. And I came back to Kano to live in that mud house.”

DID NOT INFLUENCE THE APPOINTMENT OF HIS CHILDREN

In an interview with PUNCH in 2016, Ahmed Sule’s third son, narrated how his father refused to use his name to attract favour for his children.

Ahmed spoke of how he was jobless for three months but his father who have unfettered access to the high and mighty only rendered prayers for him but didn’t make any attempt to mount pressure on people to help his “jobless” son.

“He is not a kind of person that would give you a note or take you to see whoever. I was with him at a function in Abuja a few weeks ago and the vice-president was there,” his son said.

“When I left my previous job recently, everyone was congratulating me; they said I had a father that could pave way for me to get whatever I wanted in Nigeria. Now, I have been jobless for three months, although he has been praying and encouraging me that God would give me something far better than my previous job. But I tell you, he would not take me to see the vice president, President or a permanent secretary to give me a job or a contract. He does not believe in that.”

Sule didn’t use his oratorical prowess in diplomatic circles alone, he also used it to lighten up the mood in his home. He loved his wife so dearly and composed poems for her. The deceased referred to his wife as first lady and he proved it to her in the best possible way he could.

He was also a man about town. When the Queen of England came to Nigeria during the administration of Tafawa Balewa, and they asked who was going to dance with the Queen, he was selected as one of the persons. One of his sons said he always told his children that in Lagos, whenever there was a party, if he and two other of his friends, including the late T.O.S Benson, were not there, the party was not complete.

BELIEVED IN ONE NIGERIA 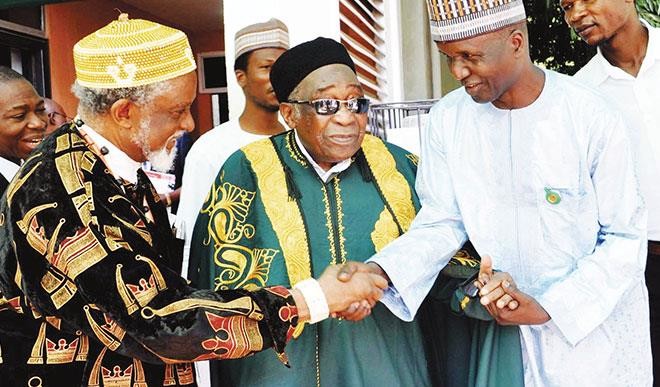 “With Laz Ekwueme,a monarch from Anambra and Hussani Suleiman, Chairman, House Committee on Governmental Affairs, during the 8th annual forum of the Laureates of the Nigerian National Order of Merit in Abuja”

The late elder statesman was one of the many Nigerians who believed in Nigeria’s unity and was of the opinion that the quest for the sovereign state of Biafra will never come to fruition.

He had said in March 2016, that Biafran agitators will never succeed “by the grace of God.”

“These (Biafran youth) are people who did not know what happened during the civil war. Let them listen to their elders. Those agitating for it are young people who don’t know what happened in those days; who don’t know the history. And in any event, those, for example, in the North are not afraid, but they don’t want it. I don’t want this country to disintegrate and I don’t pray for the disintegration of this country, not because we (the North) cannot stand on our own.

ADVISED BUHARI TO BE FAIR

When President Muhammadu Buhari won the 2015 general election, Sule led the Northern Leaders Forum delegates to visit the president and avised him to be just and fair to all Nigerians.

“It is the same Buhari that gave Nigeria a sense of direction when he was a military leader, this time around I’m sure Allah has brought him to correct the ills of the past, to reform,” he had said.

“But it was easy when you were there as a military leader, but what made it easy, justice.

“With justice you can rule Nigeria well, justice is the key, if you do justice to all and sundry, and I say all and sundry because Allah says; ‘If you are going to judge between two people, do justice irrespective of the tribe, religion or even political inclination. Justice must be done to whosoever deserves it.”

HIS BATTLE WITH SHAGARI 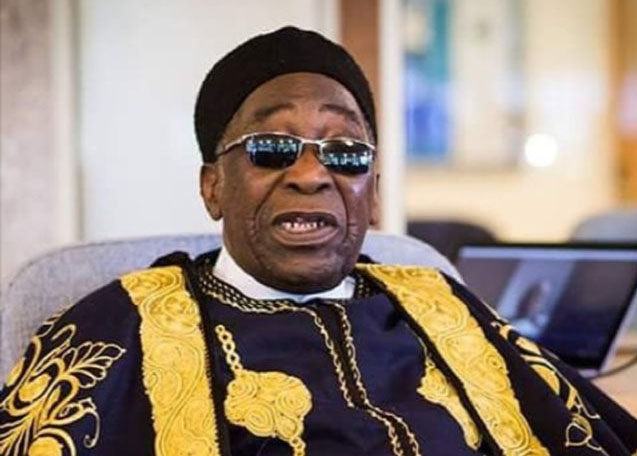 During the 1979 presidential election, he fought for the presidential ticket of the National Party of Nigeria (NPN) but lost to Shehu Shagari who became president.

A few years later, he served under Shehu Shagari’s government as Nigeria’s permanent representative to the United Nations.

Sule’s call for Nigeria’s unity has been alive even before the calls for disintegration were renewed.

In 2010, he had in the course of an interview said one of his greatest priorities had been to ensure everyone remained together – using the then Sardauna as a reference point.

“Sardauna was the premier, and HauHausa-Fulaniis grandfather was a reformer, yet he was able to knit together different ethnic groupings in the north by offering credible leadership, through justice and fair play. He never discriminated against anyone on the basis of religion or tribe. If we had adopted the philosophy of our founding fathers, perhaps we would have promoted unity among Nigerians,” he was quoted to have said.

The elder statesman had joined politics in 1954 when he was elected into the house of representatives.

He subsequently held many positions in public office after the coming of the civilian rule in 1979. Before then, he served as the minister of mines and power and also served as minister of national guidance in 1976 – making him the nation’s ombudsman. 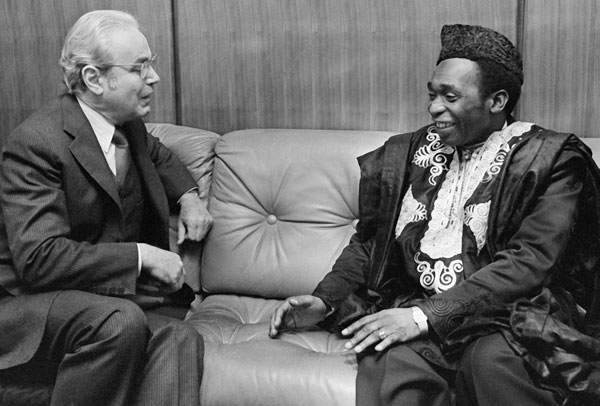 While at the United Nations, Sule chaired the UN committee which sought to end apartheid in South Africa.

His contributions to Kano earned him the recognition by Kano emirate council and was made the Dan Masani Kano by Ado Bayero, late emir of Kano.

The foremost leader was born in 1929 at Ungwar Yola, present day Kano municipal. He enrolled into primary school in 1937, and on completion began his secondary education in Kaduna in 1943.

He died on July 3 in Cairo, capital of Egypt, aged 88 and is survived by a wife and nine children.