For a man many see as the natural heir to the presidency of the vast and populous Democratic Republic of Congo (DRC), Moïse Katumbi cuts a fairly reserved figure. A gentle and sometimes bashful tycoon-turned-politician, one gets the sense that if he were his biblical namesake, his instinct would be to strike a behind-the-scenes deal with the Red Sea rather than command it to part with booming authority.

Whatever his approach, however, it has put him in good stead. The son of a Jewish father from Greece and a Congolese mother, Katumbi, now a youthful 52,  first made his mark in business. He inherited a role in the already-successful family company in Katanga province, but expanded its activities in mining and logistics. All of which helped make him one of the Congo’s richest people.

From 2007 to 2015, he was  governor of Katanga, which saw impressive economic growth and development. Under his presidency of the Lubumbashi football team TP Mazembe, the club has won the African Champions League three times.

Now Katumbi wants to be president of the country. If free and fair elections were held, he probably would be. He has significant popularity and the support of much of the opposition. But when he’ll get a chance to test this hypothesis is anyone’s guess.

President Joseph Kabila, who has led the DRC since 2001, was meant to step down when his second mandated term expired on 19 December 2016. But he simply failed to organise elections. Protests escalated until an agreement was made on 31 December that a transitional government would be established − with Kabila still as president − and that elections would be held in 2017. Yet more than halfway through the year, the polls are no closer and the electoral commission recently announced that they have been delayed indefinitely.

Moreover, in 2016, Katumbi was sentenced to 36 months in absentia for selling a property illegally. The charges are widely considered to be politically-motivated, but they mean he is stuck in exile in Brussels.

African Arguments caught up with the wannabe Congolese president:

You’ve said repeatedly now that you’ll be returning to the DRC shortly. Do you know when yet?

I’m going as quick as possible. I went with my lawyer to the High Commission for Human Rights in Geneva and got a good answer, so I’m definitely going back. I miss my country and my people.

Do you have a date?

The date is soon. I’m like a general. I need to plan everything properly.

You have much support in the DRC, but many also distrust you, including various grassroots movements that are doing much of the mobilising on the ground today. They see you as someone who’s always lived in luxury, eating at expensive restaurants and flying in private jets, while two-thirds of Congolese live in poverty. Why should they believe in you?

In a democracy, not everyone will love you. The majority would like me to run as president. I was first a businessman. 95-97% know the true story about Moïse Katumbi. I was a hardworking person, 30 years in business, a successful businessman. I didn’t go bankrupt.

When I started as governor of Katanga, the province was sending $150 million to the national level per annum. After one year, it went to $3 billion because I fought corruption. When I am president, all the people will see the change. They can look on my website, they can talk to Katangese people to see my contribution.

How will you convince the doubters?

Kabila is attacking me – only me – because he knows in the first round I will win the elections. When I arrived as governor of Katanga, Congo was producing just 8,000 tonnes of copper per annum. I stopped exports of unprocessed material and told people to build new factories. We went from 8,000 tonnes to 1.3 million tonnes.  My province was the size of France, with 4.5 million people. Within one year, the population doubled as people came from their provinces to look for good governance and jobs.

You criticise Kabila now, but you were very close to him for many years. How are substantively different from him? What specific policy changes would you make if you were president tomorrow?

I can’t deny I worked with Kabila. The constitution allowed me two terms, which I did. President Kabila today is illegal. He finished his mandate in 2016. The difference between us first is that I respected the constitution. I didn’t kill anyone. I didn’t jail anyone.

What is important is the future. I would first establish the authority of government and law. I’d fight corruption. Create jobs. We need to have a strong economy. How? First, you need energy. Congo has a lot of water and no energy. I would call the private sector and all partners to help us and use money you have locally to improve energy.

You need to create the middle-class. Also transparency, which is very important in the mining sector and all sectors. You’ve got the best place for tourism. You have to develop this. And develop education. The future of Congo is not mining but the brains of our young people. And develop agriculture. At the moment, our money is going to other countries for imports. We need to create jobs in agriculture. And the money must go to the central government and be published. You must not violate the budget. The president is going over the budget sometimes by 700%.

Surely everyone, including Kabila, would largely agree that all these things are important. What specifically would you do?

What I say is that I’ve done it when I was the governor. It’s not just theory. Take education. When I started, we had 300,000 students at school and less than 10% were girls. I built good infrastructure and paid teachers well. We went to over 3 million children after 9 years, 50% of whom were girls. When I began, we were importing 98% of our agriculture. When I left office, we were importing 25%, because I put everyone to work on agriculture.

The main difference you emphasise between you and Kabila seems to be that he violated the constitution. If he’d stepped down last year, would he have been a good president?

Kabila missed the train. He was supposed to leave on time, not kill the people. If he left, the international community and Congolese would be happy. No matter what he did wrong, people would respect him as the first president to bring democracy.

He did good things, he did bad things. Now everything has become very bad because of the killing.

From Kabila’s perspective, his strategies have worked. The elections are no closer, while the opposition’s divided. Veteran opposition leader Etienne Tshisekedi has passed away. You’re in exile. And the wealthy businessman and recent critic of Kabila, Sindika Dokolo, has just been sentenced to a year in prison. What’s your plan to change things?

These are short manoeuvres. You think Sindika Dokolo can steal $1 million? His father was the first black banker in the country. Because Dokolo is telling Kabila to step down, the president’s only strategy is to take him down with fake charges, like he did with me. He thinks this is successful, but this is a short road.

And how will you bring that road to an end?

We are bringing it to an end because our constitution gives us the right to remove him. At the moment, he doesn’t have any legal frame. The people are going to chase Kabila because Article 64 of our constitution allows us. We’re going to say “Mr President, the game is over”. In life, you have to always be true. You can’t be clever to more than 80 million people. The end is sure to come this year. Kabila will no longer be president.

Yes, but how will you bring this about? At the moment, he seems to hold all the cards.

Killings is not a card, killing is evil.

But it helps keep him in power.

It works for some time. You have read widely. All the people who killed, what is their end? Their end is very bad.

Perhaps, but sometimes only after decades of rule.

For us, it is not going to take decades. Congo is not other countries. 80 million people need change. Kabila should wake up.

Ok, so would you encourage people to go onto the streets to force this change?

Yes. I’m also going on the streets and will encourage the people, because today people are dying and no serious investors have come to the country since 2016.

Going back to Dokolo, there are rumours the two of you are forming a political alliance. Is this true?

Sindika is a Congolese brother first. He’s a businessman and just inaugurated a cement factory in Angola. He works hard. He wants to contribute to change in Congo. You see how they are killing pregnant women and children in the Kasai. Sindika wants change in the country like any Congolese person.

Given you share that goal, does it make sense to join forces?

Not just the two of us. I was with Sidika Dokolo and Félix Tshisekedi. It’s all the Congolese people, civil society, everyone. We need real change. Congolese people today are determined. I have met a lot of Congolese children born in Europe who want to go back and contribute.

Before you resigned from the ruling coalition, you talked to President Kabila. He offered you something, but you declined. What happened in that meeting?

I went to see the president to tell him “Mr President, in life there is a time to come to office and a time to go”. I said Congo is not about you, it’s about 80 million people. It’s not about Moïse Katumbi, it’s about the people.

I advised him not to continue, but to have the first peaceful democratic transition. The same people who betrayed Mobutu are now with Kabila, telling him he’s God, telling him he’s whatever. It’s bullshit. He should look at how Mobutu was finished because the people of Congo at that time needed change.

Tanzania: Magufuli’s mining reforms are a masterclass in political manoeuvring 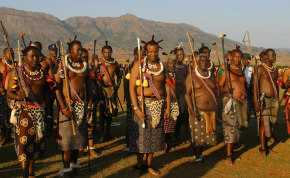