(CNN)It was an embarrassing collapse for Kenya’s ruling party.

Just two weeks after an “inspection” by President Uhuru Kenyatta, a $12 million Chinese-built Sigiri bridge in Western Kenya collapsed before it was completed.

Built by the Chinese Overseas Construction and Engineering Company in Busia County, the bridge connects a region that has historically lacked government investment and development. Around a dozen people died on the river after a boat capsized while attempting to cross in 2014.
President Kenyatta’s Jubileee Coalition has made infrastructure development a key pillar of its reelection strategy ahead of the coming presidential election.
On June 14, he made a campaign stop at the Sigiri bridge construction site and spoke to crowds gathered along the river.
He promised the bridge would bring development that the region had been denied for decades.
“There is a big difference between those who will sell to you propaganda and people who will sell to you real agenda for change,” President Uhuru Kenyatta said in a statement posted on the Presidency website. 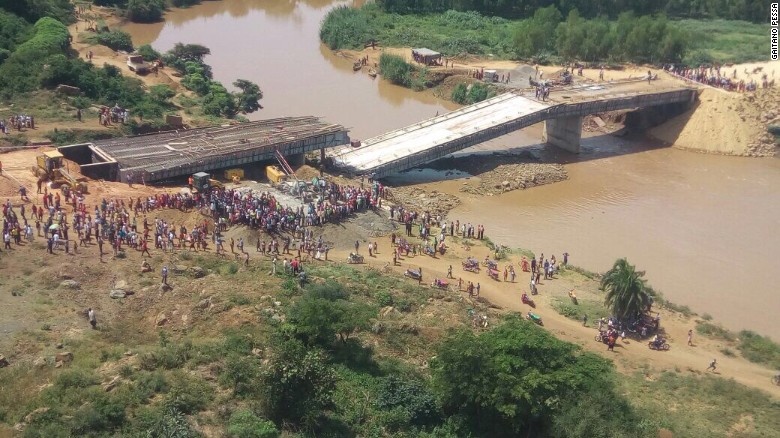 The bridge connects a region that has historically lacked government investment and development.

The $3.8 billion railway, financed by China’s Eximbank, travels from the port city of Mombasa to Nairobi, and is planned to cross Kenya and connect it to several other east African Countries.
The railway’s high price tag has raised eyebrows: it cost more than double per kilometer than the Chinese-built railway connecting Addis Ababa to Djibouti. Kenya Railways has attributed the extra cost to a more complicated geography.
Odinga blamed the recent accident on the government rushing the Sigiri project for political purposes. He referred to “tenderpreneurs”, government officials that commission projects for financial gain.
“In the past, we have had substandard works done on public projects, usually roads and bridges, which as compromised the lifespan on such projects and denied us value for money,” Odinga said.
*CNN

Africa and the Energy Sector: Perspectives from Simon Gosling