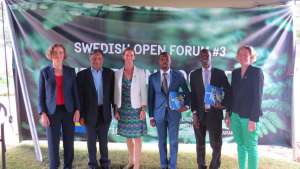 Sweden through the Swedish Embassy in Harare is collaborating with a number of partners to create a green economy and transition Zimbabwe to a society built on sustainable environmental solutions.

A green economy is defined as an economy that aims at reducing environmental risks and ecological scarcities, and that aims for sustainable development without degrading the environment.

According to a publication titled:Innovation-the Swedish way by Eva Krutmeijer, some of the world’s most successful innovators are from Sweden.

The same publication says that Sweden excels at environmental technology and sustainable solutions, as international rankings show.It is reported that many Swedish innovations have become highly successful exports.It is also reported that often, they address complex global challenges such as poverty alleviation and climate change.

For a country like Zimbabwe faced with economic challenges including numerous environmental problems such as land degradation, excessive littering, urban streambank agriculture, massive pollution and wetlands destruction, just to mention a few and which impact on a green economy, the Swedish interventions could not have come at a better time.

Sofia Calltorp, Ambassador for the Embassy of Sweden in Harare said that her government had just signed a new five year strategy for development cooperation with Zimbabwe.

“We are seeking new partnerships in Zimbabwe, especially in the area of climate change and environment,” she said.

The agreement aims to promote environmental awareness by harnessing the power of the transformative arts.

“We want to start a discussion around environmental issues and climate change,” Calltorp said.

She said that these partnerships seek to create new jobs and business opportunities.

Selin added that particular focus will be on women and children who mostly bear the brunt of climate change impacts.

Also the Swedish embassy in Harare has introduced its Swedish Open Forum 3 series focusing on the green society.

According to MartinBuch Larsen, Communication and Promotion Officer for the Embassy of Sweden in Harare, the recent forum was the first in 2017.The 2015 one was called the open society, the 2016 one was the innovative society and this year it was called the green society.

The recent open forum attended by various stakeholders in Harare sought to unpack what it would take to green Zimbabwe through open and interactive dialogue.

The forum also explored challenges, benefits and risks in transitioning to a society built on sustainable environmental solutions. Other issues focused on how the public and private sector can join hands to create green jobs for the youths.

Green jobs are decent jobs that contribute to preserve or restore the environment, be they in traditional sectors such as manufacturing and construction, or in new, emerging green sectors such as renewable energy and energy efficiency.

Nilsson said to create a green economy, it is necessary to have an enabling environment. She said that there is need introduce lower   taxation systems for renewable energy initiatives and come up with innovative ideas.

She also said that there is need to take business on board and commercialise opportunities. She emphasised the need for public awareness on the issues and engagement of communities to spearhead change.

“We also need conscious consumers who are aware of the needs of buying green to create a green economy,” Nilsson said.

She said that the public or citizens should be able to put pressure on the leadership to push for green economies. Nilsson also emphasised the need for sustained dialogue on the green economy.

She added that in Sweden, there was ongoing dialogue between suppliers and procurers of commodities for a 50% procurement threshold focusing on organic foods.

TawandaMuzamwese, Executive Director of the Business Council for Sustainable Development Zimbabwe (BCSDZ)said at the same forum that private sector in Zimbabwe was still facing challenges on greening initiatives but there were promising initiatives the organisation was working on.

Working with at least 60 companies in the private sector in Zimbabwe, BCSDZ is promoting the mainstreaming of sustainable development initiatives for local business.

“We are encouraging our member organisations and companies to adopt renewable energy for productive use for example through solar lighting and solar irrigation initiatives,” Muzamwese said.

He added that his organisation is also promoting industrial energy efficiency and environmental sound management of chemicals.Other initiatives include promoting the Standards Association of Zimbabwe (SAZ) environmental management systems for companies to adopt. The organisation has also working on a Public-Private-Partnership (PPP) initiative supported by the United Nations Industrial Development Organisation (UNIDO) called the Green Industry Initiative to replace absolete technology of the 1950s in some of Zimbabwe’s companies. The idea is to establish new green industries also focusing on recycling initiatives.

Ronny Mbaisa, Executive Director of the Zimbabwe Sunshine Group which collaborates with environmentally conscious youths and has pioneered a number of community projects in the area of waste management said that his organisation was working on lobbying the government of Zimbabwe to formalise the recycling industry. They also plan to replicate the Swedish model of recycling drop-off centres and the Malmor waste to energy transfer centre following his recent exchange sharing visit to the country.

Ashok Chakravarti, Zimbabwe Country Coach, Ease of Doing Business programme, Office of the President and Cabinet said that there was a strong need for a favourable, enabling policy environment with proper regulations, taxes and incentives to create a green economy in Zimbabwe. He said that there was need to change some laws and regulations in the country to promote a green economy.Chakravarti said that the current economic blueprint, the Zimbabwe Agenda for Sustainable Socio-Economic Transformation, (ZIMASSET) being pursued by government and is coming to an end lacks green economy and sustainable development aspects and needs to be revisited.